The Vancouver Canucks announced today that they will host Fan Appreciation Night to celebrate the team’s passionate and loyal supporters on Saturday, April 8th when the team faces the Edmonton Oilers.

As part of the night’s festivities and giveaways, the first 13,000 fans in attendance, of legal drinking age, will receive a commemorative Budweiser-Canucks Goal-Synced Glass which will light up in unison each time a goal is scored. This is the first time Budweiser’s Red Light innovation will be used in-venue and will provide fans with the opportunity to take their goal celebrations and support for the Vancouver Canucks to the next level.

To celebrate the passionate fans and unwavering support, the special edition Budweiser-Canucks Goal-Synced Glass, will light up Rogers Arena in celebration of Fan Appreciation Night (#LightUpVancouver). 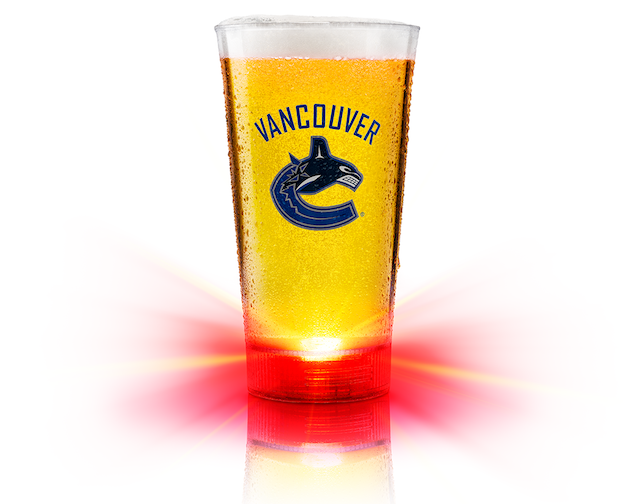 To start the festivities, fans will have a chance to view a special video that incorporates the Budweiser-Canucks Goal-Synced Glass and join in lighting up the arena in unison. Fans under legal drinking age will be provided with illuminated bracelets to join in lighting up Rogers Arena.

Fans who don’t have a ticket to the game can win the chance to be there. Fans can enter at canucks.com/fan for a prize of a pair of lower bowl tickets, a player signed jersey, a tour of the press box, a $50 concession stand gift card and 2 Budweiser-Canucks Goal-Synced Glasses.

Join the Party of the Plaza April 8, 2017, 4:30pm – 6:30pm
The Toyota Plaza on the North side of Rogers Arena will feature music, face painting, poster making station among other fun activities for fans to enjoy prior to the season finale at home. Fans will also get a chance to meet Canucks Alumnus who will be on hand for autograph signings on the plaza.

Player Awards and Season Finale Game April 8, 2017, 6:45pm
Fans with tickets to the game are encouraged to be in their seats by 6:45pm (doors open at 5:30pm) for the presentation of the 2016/17 player awards, including the Most Valuable Player, Best Defenceman, Most Exciting Player, and Leading Scorer that will be presented by a season ticket members. Each fan in attendance will receive a commemorative magazine prior to puck drop and will be eligible to win a number of great prizes throughout the course of the game.

Happy Hour from 5:30pm to 6:30pm will have food and beverage specials including discounts on all drinks, a special Budweiser promotion for holders of the Budweiser-Canucks Goal-Synced Glasses, and a kids combo (12 and under) that includes a hot dog, Lindt chocolate bar and bag of chips for $6.

Budweiser has offered up a Canucks Fan Appreciation Night Prize Pack for me to give away to one lucky reader.

Follow Budweiser Canada on Twitter and Facebook for more information. I will draw one winner at random from all entries at 12:00pm on Friday, April 7, 2017. Must be 19+. Please enjoy responsibly. Details of this prize are as listed in the post. Prize does not include tickets.

Update The winner is Mari Knuff!