The Variety Challenger Baseball Field in Vancouver really is a Field of Dreams — and I’ve been to the actual Field of Dreams movie site in Dyersville, Iowa! The first of its kind in Western Canada, it was the brainchild of the Vancouver Canadians who, with help from the Vancouver Park Board, the Jays Care Foundation, and a boost from Variety BC, have created a new permanent baseball field for The BC Challenger Baseball Program, a program devoted to children with physical, developmental and intellectual disabilities.

I spoke with Andy Dunn, Partner & President of the Vancouver Canadians about how this dream came to fruition. He told me that he knew Ian McLean, National Coordinator, Challenger Baseball Canada for years and eventually something just clicked.

“In the States there’s a program called The Miracle Field and I was familiar with it, and getting to know Ian and all the hard work, love, and effort he puts into the Challenger Baseball program, and seeing where they were playing, I just kept thinking – we can do better for these kids and these athletes.”

One day Andy had the opportunity to have a long discussion with Malcolm Bromley, General Manager, Vancouver Board of Parks and Recreation around the time that the Park Board was looking at revamping Hillcrest. A project that involved a baseball field for kids with physical and cognitive disabilities.

“Without Variety this field would not be in place.”

They went to work with Hillcrest, Little Mountain Little League, and funding partners Jays Care Foundation and the Park Board but were still short on funding until Variety stepped up to the plate.

Because of the generosity of these parties, kids will be able to play on a fully turfed field, with extra wide and deep dugouts so the kids can all be together.

“The main part about being a part of a team is not so much the at-bats and that other stuff, it’s the camaraderie of being a teammate,” Andy explains. Having an accessible ballpark allows kids to be part of so much more than 9 innings of baseball.

“We have to provide these kids a place to play, and everybody deserves to play.” 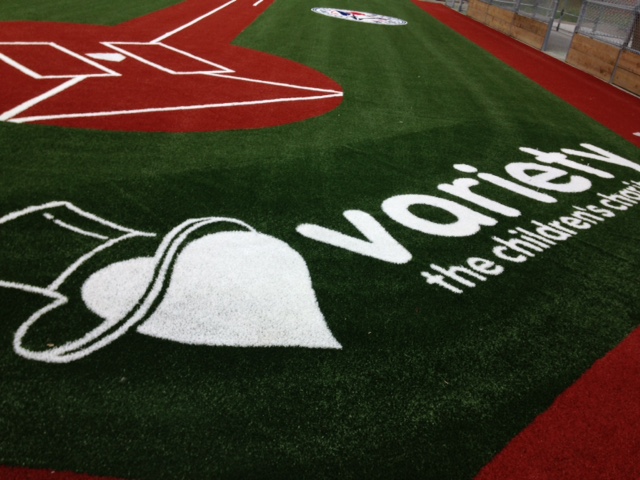 This past weekend, Variety – The Children’s Charity hosted its 51st Show of Hearts Telethon and raised over $5 million for BC kids with special needs. This is just one of the many initiatives that Variety supports.

You can still support anytime by donating online or by texting “KIDS” to 45678 to give $20 automatically.

Rebecca Bollwitt/Miss604 is a sponsor of the Show of Hearts Social Lounge and a Board Member at Variety
Current Contests on Miss604
*All contests are open to residents of Canada only, unless otherwise stated. Contest timelines are published on each individual post along with entry methods. Some contests may only be open to those 19 years of age and older. Winners are announced on the contest blog posts. Contest policy »
Comments are closed on this post
Advertisement