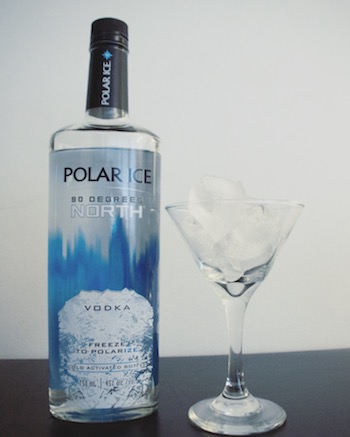 Where’s the bear? Polar Ice Vodka’s limited edition bearless bottle has hit store shelves this month. Their iconic polar bear logo has been removed from bottles to raise awareness for Polar Bears International’s mission to keep the magic of Canada’s arctic alive for generations to come.

The primary conservation concern for polar bears is habitat loss and reduced access to their primary prey due to climate change. PBI’s mission is to conserve polar bears and the sea ice they depend on.

To get the most out of your Polar Ice Vodka, I have picked out two recipes that will taste delicious, for a cause.

On Monday, February 27th, which is International Polar Bear Day, I will introduce a one-day fundraising campaign that will support the cause. Stay tuned!

Engage online this month using #SaveOurSeaIce and following Polar Ice Vodka on Twitter and Facebook. Through media, science, and advocacy, the work to inspire people to care about the Arctic, the threats to its future, and the connection between this remote region and our global climate.

Also on Miss604.com
« Things to do in Vancouver This Weekend
Urban Grind at Harbour Centre »