Broadway Across Canada is thrilled to announce this year’s stunning season at the Queen Elizabeth Theatre in Vancouver. The 2017-2018 season will open with Cameron Mackintosh’s spectacular new production of Andrew Lloyd Webber’s phenomenal musical success, The Phantom of the Opera. Next up is the brand new production of the romantic and beloved classic, The Sound of Music and back by popular demand is the Grammy and Olivier Award-winning Best Musical about Rock and Roll Hall of Famers The Four Seasons, Jersey Boys. Rounding off the season is the true American dream story of Motown’s founder Barry Gordy, Motown the Musical. 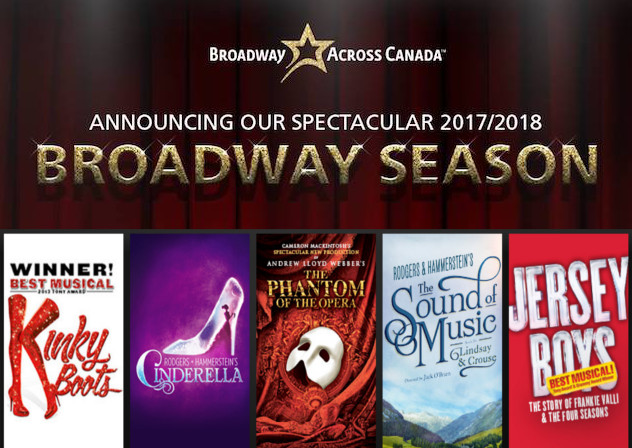 THE PHANTOM OF THE OPERA – July 11-23, 2017
Cameron Mackintosh’s spectacular new production of Andrew Lloyd Webber’s phenomenal musical success, The Phantom of the Opera, will come to Vancouver as part of a brand new North American Tour. Critics are raving that this breathtaking production is bigger and better than ever before. The beloved story and thrilling score – with songs like “Music of the Night”, “All I Ask Of You”, and “Masquerade” is performed by a cast and orchestra of 52, making this PHANTOM one of the largest productions now on tour.

THE SOUND OF MUSIC – September 12-17, 2017
A brand new production of The Sound of Music, is the spirited, romantic and beloved musical story of Maria and the von Trapp Family. Featuring music by Richard Rodgers, lyrics by Oscar Hammerstein II, book by Howard Lindsay and Russel Crouse, suggested by “The Trapp Family Singers” by Maria Augusta Trapp. 2015 marked the 50th anniversary of the film version, which continues to be the most successful movie musical in history.

JERSEY BOYS – November 14-19, 2017
This is the true story of how four blue-collar kids became one of the greatest successes in pop music history. They wrote their own songs, invented their own sounds and sold 175 million records worldwide – all before they were 30! JERSEY BOYS features their hit songs “Sherry,” “Big Girls Don’t Cry,” “Rag Doll,” “Oh What a Night” and “Can’t Take My Eyes Off You.”

MOTOWN THE MUSICAL – February 6–11, 2018
It began as one man’s story… became everyone’s music and is now Broadway’s musical. This is the true American dream story of Motown’s founder Berry Gordy’s journey from featherweight boxer to heavyweight music mogul who launched the careers of Diana Ross, Michael Jackson, Smokey Robinson and many more. Motown shattered barriers; shaped our lives and made us all move to the same beat. Featuring classic songs as “My Girl”, “Ain’t No Mountain High Enough”, experience the story behind the music in the record-breaking smash hit.

Also on Miss604.com
« Things to do in Vancouver This Weekend
Variety Show of Hearts Telethon 2017 »