If it wasn’t already cool enough that Vancouver was going to be home to the World’s Largest Christmas Light Maze this season, I recently discovered that Enchant will be supporting Variety – The Children’s Charity of BC and other local community partners. 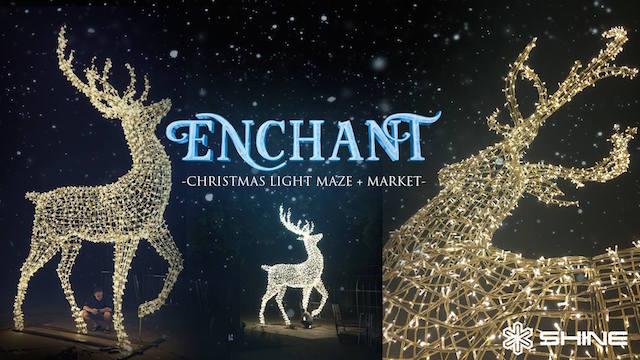 Enchant will have 55,000 square feet of brilliantly illuminated sculptures along with the light maze. The market will have over 40 local vendors, 12 food trucks and a licensed eating area where guests can enjoy their favourite holiday drink. There will also be a VIP Christmas Party area.

Tickets are available now online for specific dates. Season passes are sold out. December 8th and 22nd are fundraising nights at Enchant Christmas where you can support Variety BC. You can also use code VCC2016 anytime to automatically donate 20% of your ticket purchase to the organization.

I have 4 tickets to give away to this spectacular event thanks to Variety BC. You and three friends or loved ones can experience this new holiday attraction on December 7th. Here’s how you can enter to win:

Prize is valid only for entry on December 7th. I will draw one winner at random from all entries at 12:00pm on Tuesday, November 29, 2016.

About Variety BC – The Children’s Charity
Variety steps in where health care ends to provide direct support to children in BC with special needs. Since 1966, the ways in which they make a difference are vast in number yet heartfelt on every occasion. This includes life-saving medication & medical equipment, life-changing mobility equipment & specialized therapies, as well as life-enriching education & experiences. All that and much more! Miss604 is a proud member of Variety BC.

If you wish to receive this weekly/weekend event list right to your email inbox, please sign up for the new Miss604 Weekly Events Newsletter below. It will be sent once a week, only to those who opt-in.

Update The winner is Megan Bell!