This post has been contributed by Don Enright, Past President and Volunteer with the Stanley Park Ecology Society (“SPES”). I have been following SPES since I moved into the West End over a decade ago and I have been a member for four years. I wanted to offer the team an opportunity to share their news, events, and work so I have created “SPES Saturday” where they contribute and share stories with my audience once a month.

The Harlequin Ducks of Stanley Park

Walking Stanley Park’s sea wall at this time of year is one of my favourite de-stressing activities. As you head out along the water, the noise of the city drops away, the gentle sea air hits you, and you just start to breathe and relax. And once you slow down a bit, you’ll start to see an amazing variety of bird life along the rocky shore. 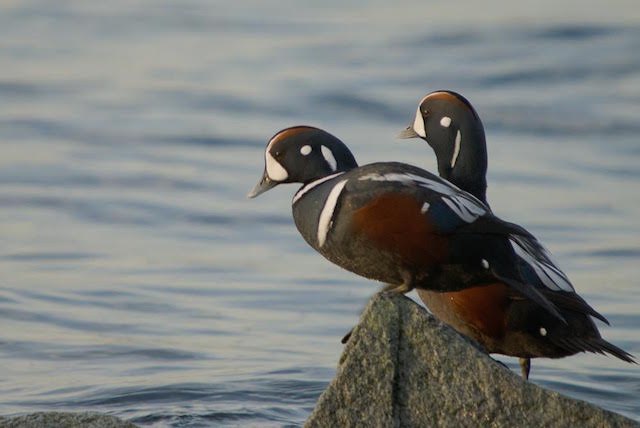 My favourite duck in the world is just arriving at this time of year: the harlequin. It gets its name from the brightly-costumed character in Italian commedia, but its Latin name is even more evocative: Histrionicus histrionicus. This is one colourful bird, and once you learn to recognize its red, blue, black, and white patterns, you’ll easily spot it from afar. The females lack the bright colours of their mates, but have a subtle beauty of their own.

It’s a tiny thing, the shape of a bathtub toy, but it’s tough. The harlequin duck is perfectly at ease in our stormy winter waters, surfing and diving deep below the surface in search of the steady diet of underwater critters that it needs to support its fast metabolism.

In summer it nests inland, finding a sheltered spot along whitewater creeks and rivers, where it swims and bobs confidently through currents that would terrify a kayaker. It’s really a remarkable swimmer, for its size.

Harlequin ducks are also found in eastern Canada, and their numbers there have dropped alarmingly. Here in the west they’re in better shape, though biologists are monitoring their numbers closely. As with all of our winter birds, an oil spill along the coast could be disastrous. 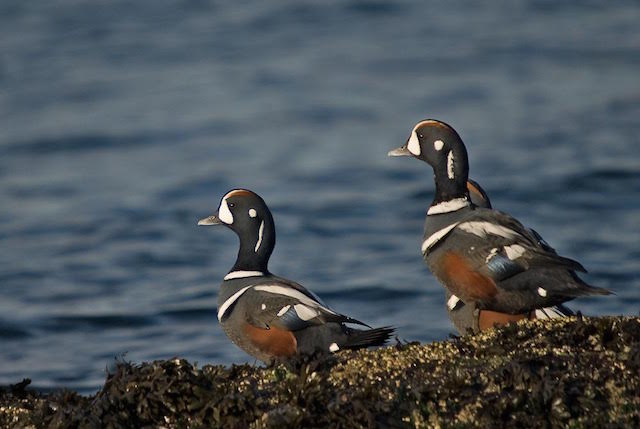 The Stanley Park seawall is one of the best places in Canada to photograph the Harlie, as birders call it. Head out to Ferguson Point, between Second and Third Beach. You’ll want a zoom lens for this one, and please resist the urge to walk out onto slippery, wet rocks: you’ll disturb the birds, and might crack your skull or your lens (I’m speaking from experience here; don’t ask.)

The contrast on the duck’s harlequin face is surprisingly tough to capture with a digital camera without it blowing out. Many cameras have an exposure compensator—set it to -1 for this bird and you’ll be fine.

With or without a camera, I hope you take some time for a de-stressing seawall walk this winter. The Harlies will be waiting for you. Lsten for their odd high-pitched “Eep!” call. I like to think it’s their way of saying hello.