Join Realwheels Theatre for an evening of savage wit and uncompromising truth-telling as they present CREEPS, the award-winning dark comedy by David E. Freeman that changed Canadian theatre forever.

CREEPS will give audiences a rare glimpse into the lived experience of disability, filtered through a 1970’s lens. Featuring a truly mixed-ability cast, seven professional actors including three who lie with disability, the casting speaks to Realwheels Theatre’s ongoing commitment to fostering interchange between mainstream and disability arts sectors.

“You will then be brought to our attention either by relatives who have no room for you in the attic, or by neighbours who are distressed to see you out in the street, clashing with the landscape.” – excerpt from CREEPS

David E. Freeman, who lived with cerebral palsy, was one of the first writers to put his own voice – a Canadian voice – on the stage in the early 70s. Written on a typewriter that Freeman operated with a stick held between his teeth, CREEPS tells the story of four disabled men who spend their days toiling away in a “sheltered workshop”. Tired of the way they’ve been treated, they rebel and barricade themselves in the washroom. The brutality and hilarity of Freeman’s uncompromising and sardonic dialogue drives the show and expresses the tension of the oppressed with a raw ferocity and clarity.

“If you were to ask Canadian theatre artists, ‘which play, written and produced in the early ’70s, is recognized for having changed Canadian theatre forever?’, the answer would most likely be: David Freeman’s CREEPS,” Rena Cohen, Managing Artistic Director at Realwheels Theatre and the Producer/Dramaturge for CREEPS told me last week.

Rena joined Realwheels in late 2009 after meeting founder, James Sanders. “James – along with two other Vancouver-based theatre artists, Bob Frazer and Kevin Kerr – had created and produced SKYDIVE, one of the most successful productions to ever come out of Vancouver.”

She says that SKYDIVE offered audiences amazing technical innovation (in which a person with quadriplegia flies!), and the show had proven impact on audiences’ perceptions of disability. “I’d been working in arts management and as a speech/presentations coach when James invited me to discuss the company’s next steps.” Realwheels is a company on the rise, and in 2015 it received the City of Vancouver Award of Excellence.

When CREEPS was first produced, Rena says Canadian theatre was itself a central metaphor of the play. 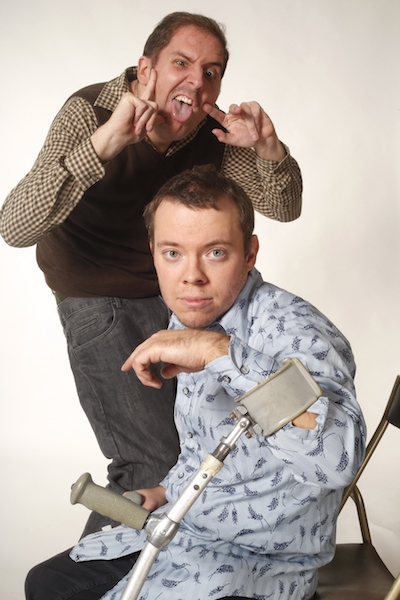 “We were then in our infancy, being ‘helped’ and controlled by the ex-pat British community. CREEPS possesses an authentically Canadian voice, at a time when the Canadian voice was absent from our stages; we weren’t even aware of it until the play came out. We can’t overestimate its impact at the time. Some senior Vancouver theatre artists have let us know that CREEPS was the play that convinced them to enter theatre as a profession. It was theatre as relevant as theatre could be. CREEPS went on to win the Chalmers Award and New York Drama Desk Award. As one reviewer wrote at the time: “Freeman handles his material triumphantly”.”

Having known about the play for many years, Rena says it’s even studied in theatre programs – and a member of her cast today, Adam Grant Warren, actually wrote a paper on it at university.

“When the title was raised a couple of years ago during a brainstorming session about projects that would a) fulfill our mandate – to create and produce performances that deepen understanding of disability, and b) excite us as artists, the enthusiasm in the room was immediately palpable. CREEPS hadn’t received a production in Vancouver in years; it was time to revisit this work. And, we were committed to mounting a fully-integrated production; of the seven professional actors in the show, three are artists with disabilities.”

Since CREEPS is written and set in the 1970s, I had to ask Rena how well it translates to today.

“The play certainly gives everyone an opportunity to reflect on how far we’ve come in the 45 years since the play was first produced. And, how far we still need to go.”

“The language used and assumptions made by the characters in CREEPS are rooted in the 1970s and in their direct, personal life experience. Some of the dialogue is therefore likely to be offensive.”

Rena says that our cultural norms have evolved, but Freeman’s characters are also so believably drawn that the universality of their experience – their humour, their frustration, their anger – all rooted in the genuine experience of the oppressed, makes the fundamental struggle of the play highly relatable. She says that if they’re successful, that will come across.

“Even today, attitudinal barriers are far more challenging for people with disabilities than physical barriers. We need to challenge both, but attitudes and preconceptions about disability are the hardest to modify. I continue to work on challenging my own ableist assumptions.”

In awe of the writing of this play, and how it can stand the test of time, I asked Rena if she had any advice for the next generation of playwrights.

“‘Write what you know’ is a cliché, but true. Write about what fascinates you, what angers you. Ask big, messy questions about what drives your passion. Read every day and write every day. And in the end, be prepared to take responsibility for whatever moral imperative you put out there.” She says that she doesn’t think you can or should write for a future audience, “but recognize that it’s the human truths that withstand the test of time.”

Learn more about Realwheels Theatre by following them on Facebook, Twitter, and YouTube. After CREEPS, Realwheels will be working on a community project called Comedy on Wheels, launching February 2017, with performances scheduled for May 2017. They’ll be working with international comedy expert David Granirer, harness the community’s ability to use humour to cope with life’s challenges.

Also on Miss604.com
« Things to do on Grouse, Cypress and Seymour This Winter
Canyon Lights at Capilano Suspension Bridge: Win a Family Pack of Tickets »