The Virtual Stage presents the fifth annual production of its acclaimed Zombie Syndrome interactive theatre-adventure series, The Zombie Syndrome: Dead In The Water, from October 4th to 31, 2016 on Granville Island.

This year, audience members will be challenged to travel by land and sea, brave the elements, and defeat a strange new breed of mutant zombie-vampires. 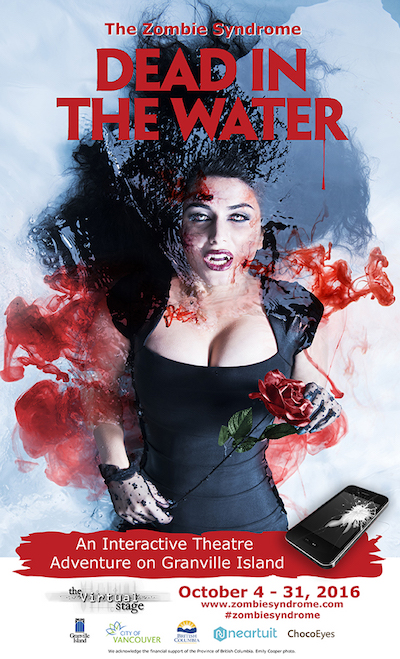 For the first time in Canadian professional theatre, this chilling new production will feature the integration of Apple’s sophisticated iBeacon technology. The Virtual Stage has teamed with the award-winning innovators behind local Vancouver company TerraTap Technologies to integrate its mobile content delivery system neartuit into the experience.

The location-based iBeacons will boost interactivity by triggering clues on audience members’ smartphones (through an app), helping teams of up to 18 people as they race against time in their battle with blood-thirsty forces of darkness.

A new highlight of this thrilling adventure involves travelling on the Pacific Ocean; therefore, audiences would be wise to bring their sea legs and dress for the weather!

Disclaimer: Rated PG-13. Contains zombies, vampires, and other mature subject matter. Children under the age of 13 need to be accompanied by a parent or guardian.

Win Tickets to the Zombie Syndrome

I have a prize pack for one lucky winner to enjoy on Halloween night that includes: A pair of tickets to The Zombie Syndrome: Dead In The Water on October 31st at 8:00pm; 2 official Zombie Syndrome t-shirts; and a bag of Halloween candy to enjoy during or after this spooky theatrical adventure. Here’s how you can enter to win:

RT to enter to win tickets to @thevirtualstage #ZombieSyndrome on Halloween night from @Miss604 http://owl.li/QgaJ304Tj8x

For more information, updates, and declassified information regarding this year’s mission, follow The Virtual Stage on Twitter and Facebook for more information. Be sure to tweet about your mission’s success or failure and announce your team’s score with the hashtag: #ZombieSyndrome.

I will draw one winner at random from all entries at 12:00pm on Tuesday, October 11, 2016. The prize is exclusively for Halloween night so the winner must be able to attend, or another winner will be drawn.

Update The winner is Tanya!

Share7
Tweet70
Share2
Pin
Email
Reddit
WhatsApp
79 Shares
Current Contests on Miss604
*All contests are open to residents of Canada only, unless otherwise stated. Contest timelines are published on each individual post along with entry methods. Some contests may only be open to those 19 years of age and older. Winners are announced on the contest blog posts. Contest policy »

Also on Miss604.com
« Covenant House Sleep Out: Support My Fourth Year
Hanging Out with Bats in Stanley Park »