Tickets are now on sale for the 29th annual Vancouver Writers Fest, with a remarkable lineup of more than 90 events, with over 100 local and international authors. 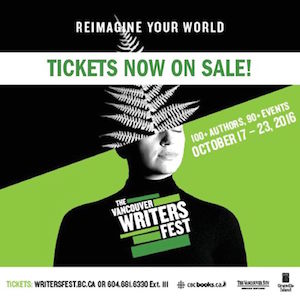 The lineup of readings, conversations, interviews and multidisciplinary performances attracts more than 17,000 audience members each year, and features more than 101 authors from across the globe, including some listed for upcoming prestigious awards including The Scotiabank Giller Prize and The Man Booker Prize.

There will be two special events with musical stars: Elvis Costello presents his new book, Unfaithful Music and Disappearing Ink, on Wednesday, November 23 at 8:00pm at The Chan Centre for the Performing Arts. The Band’s Robbie Robertson will discuss his autobiography, Testament, on Tuesday, December 6 at 7:30pm, Christ Church Cathedral. Offering an entirely unique way to experience these two sensational performers, the special events are two of dozens that the Festival presents outside of the weeklong celebrations.

Author appearances at the 2016 Festival include:

To celebrate the remarkable series of events, the Festival is giving away 101 books, one to represent each author featured. Vancouverites will be able to find the specially wrapped books across the city: in coffee shops, on library tables, and even park benches. Ranging from new titles to classics from previous years, the gifts will be distributed until October 17, when the Fest begins.

A complete set of events can be found online. Follow the Vancouver Writers Fest on Facebook and Twitter for more information and the latest news from the festival.