Lush evergreens, waves lapping at a pebbly beach, snow capped peaks, are all images that would make any local homesick for the Pacific Northwest. However, the soaked streets, glistening reflections from headlights and neon signs, and a couple huddled under an umbrella are scenes that really get me. I can’t help but feel something for my hometown, something for my partner, and something about those early fall nights in the rain that are so full of darkness, but full of love.

It’s these scenes that artist David Wilson has captured so beautifully, and meaningfully, in his latest collection that will be on display at the Kimoto Gallery this month. 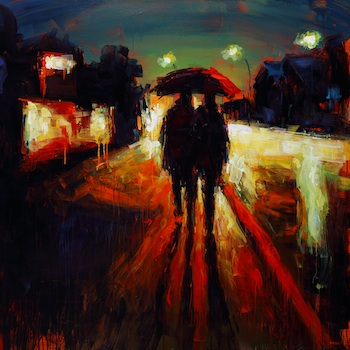 Stay With Me, acrylic on canvas, 2016 David Wilson

“I stepped away from sort of the literal representation of the scenes that I have traditionally painted and I started inserting a bit more abstraction to the work and then a little bit more of myself,” Wilson told me just a day before his show ABSENCE opens at the gallery.

“Some thoughts and ideas that have always been present in the work but I think by actually writing some of those thoughts down and putting them on a canvas, making them a bit more overt has added a different element to the work.”

Wilson feels that this is his strongest exhibition to date. After health issues sidelined him a few years ago, he now feels a renewed vitality and energy. “In the last year and a half I have had good health and I think that’s reflected in the work. I’m very happy with the direction it’s going.”

For this collection, he started off by trying to create something new, and something a bit more personal, so he began with a series of studies, which is a canvas or panel he works on to flush out his ideas.

“I do that initially as a way to prepare myself for the large canvas. Because with a large canvas, if you’re not getting it right you have to start all over again and it’s a fairly large investment of time and energy.”

“I learned a lot about myself as a painter going through that process, it was really quite enjoyable.”

When trying a new approach, Wilson is very aware of the challenges that might come with it. “There’s always that risk that people will look at what you do, that’s new, and think that’s not what I want to buy anymore, that’s not what really interests me.” He finds that in time, however, as an artist it’s a great opportunity to grow and gain a greater understanding of what he is doing. “I like to keep moving, I don’t really like to sit still very long.”

The new process seems to have paid off, as he accumulated over 30 pieces for the Kimoto Gallery show. “I wasn’t really paying attention to how many [pieces] I had and when I pulled them out to do an inventory check I had 33 paintings to deliver to the gallery and that’s a lot!”

Wilson says that he does try to produce a larger selection of work to provide opportunities for different price points, different tastes. 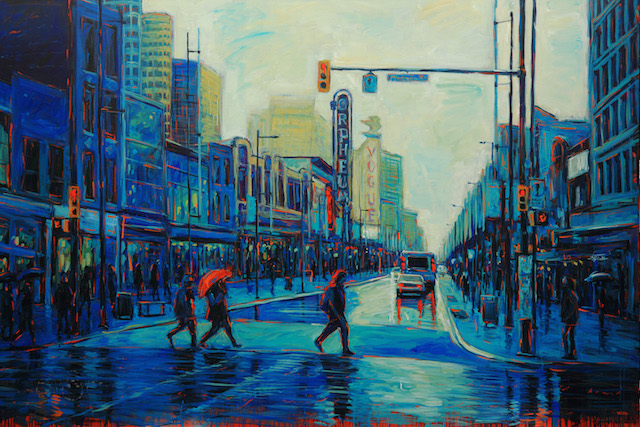 A common theme in his paintings is Vancouver — whether it’s the Sea Wall, a rainy night in Gastown or on Commercial Drive, or the recognizable neon of Vancouver’s entertainment district.

“I think the cityscapes they create an opportunity to tap into a shared experience that most Vancouverites have here, I think that’s why people respond so well with the umbrellas and the rain. We all have that experience and initially when I started doing this work it was a bit of a shock for people to look at it and say, ‘Oh, it doesn’t look so bad when it’s raining here in Vancouver after all!’ We like to complain about the rain but I think we have this love/hate relationship with it too.”

“For the most part I just paint Vancouver because that’s where I live and it’s a city that has grown near and dear to my heart.”

Wilson moved to the city from Powell River 25 years ago and has raised his family here. His family has thought about living in other cities, but they just love it here so much, plus they still get to travel.

“This city is conducive to art making, for a variety of reasons, it’s just a great city to live in. The quality of life is pretty high here, it’s clean, it’s safe, it’s expensive but that’s just one aspect of it. It’s beautiful here.” The artists Wilson knows are also very supportive of each other. “I think there’s a lot of good art being produced here.”

With so much inspiration around every corner, but a new approach to this exhibition, Wilson’s subject matter blends some of his old favourites with new symbols — especially when it comes to Granville Street, which you’ll see quite often in his collections. 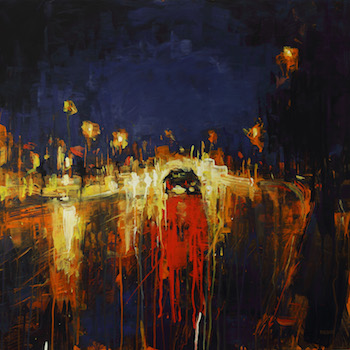 Dont Look Back, acrylic on board, 2016 David Wilson

“For this exhibition in particular I sort of stepped away, I do have some paintings of Granville Street, just because it’s sort of like a magnet that draws me back to it, but my emphasis was on the figure walking with the umbrella in the rain. I like the symbolism associated with the umbrella.”

For the show’s outline, he told Kimoto Gallery: “It is a nod to my limited abilities to form an envelop of protection or safety around the ones I care most deeply for and to the fragile nature of life itself as the vagaries of life frequently remind me of my limited abilities to control circumstances. When caught in a downpour an umbrella may keep much of you dry but you’re still going to get wet.”

With this, he has managed to capture a view of Vancouver through the watery lens of a downpour without making it dark or chaotic, but warm.

“Anybody that lives in this city has had to get under an umbrella at some point. I think that’s probably the direction I’m moving towards more, sort of the personal experience that we have, rather than the locations. That will always be a part of what I do, at least for now, but that’s where I’m heading.”