Tucked away behind the busy corner of Oak and 41st, there is a training centre, swimming pool, performing arts centre, gallery, museum, library — and more — all under one roof. I was invited to tour Vancouver’s Jewish Community Centre (“JCC”) earlier this summer and between daycare classes learning about growing vegetables in their own garden, youth going off to camp, and the seniors playing duplicate bridge, I was blown away by the community resources available all in one place. 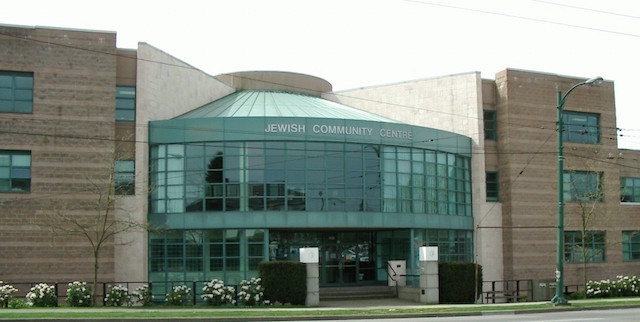 “Anybody can be a member here and anybody can join any of our programs here,” Kyle Berger, Adult Sports Co-ordinator, told me at the start of my tour by the main entrance of the building. He and Janelle Daos, Co-Op Marketing Consultant, were my guides for the morning.

“No matter who you are or where you live, we are completely open to anybody. I wouldn’t say we’re public because we do charge membership rates to come use our fitness room and our pool and all of that stuff but anybody can be a member.”

Kyle says that one of the biggest misconceptions is that the community centre is only for the Jewish community, and while 70% of their members are Jewish, 30% are not and everyone is welcome.

We moved on from the entranceway and over to the auditorium, theatre, and art gallery spaces, which are adjacent to a bustling snack bar. Inside the theatre spaces, the summer’s musical theatre program students were rehearsing. “5, 6, 7 8!”

“We’re one of the best-kept secrets in the city because we have amazing facilities that nobody driving by would guess are just sitting here,” Kyle hushed his voice as the group tapped away on stage. “That goes for anything from the fact that we have a full fitness facility and racquet court, and swimming pool, to a 300 plus seat theatre with all the bells and whistles.” 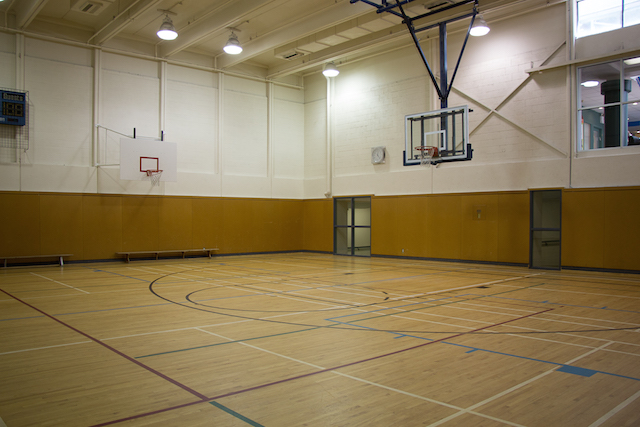 I had been to the Norman Rothstein Theatre before, for a performance of “Evil Dead: The Musical”, and I’ve covered Chutzpah! Festival listings at the theatre, but I really didn’t know that there was so much more to the entire facility just beyond the lobby.

Kyle and Janelle led me over to the Sidney & Gertrude Zack Gallery next. “This is open to the public, it’s free, anyone can come in. They feature a different exhibition each month and right now it’s Photo Club Vancouver,” Janelle said as we entered the gleaming white space with streams of natural light pouring in from the skylights.

“There’s been a gallery here for a long time, ever since the centre opened [65 years ago]” Art Gallery Director Linda Lando explained. “We have this fabulous projector and screen that comes down to the floor as well so we do rentals for event space as well, we can fit about 60 people in here. It’s a very nice space. We also have a brand new sound system and we also do poetry events in here.”

Linda said that local poetry group Pandora’s Collective comes in once per gallery show and writes poems based on the imagery in the show.

From the gallery, we walked over to the bridge program where 60 seniors participate each week, making it by far the most popular program for seniors. Leah Deslauriers, Seniors Department Coordinator whisked by us with a large coffee can, preparing to refuel the competitive players in the Marjorie Groberman Duplicate Bridge Club. She said they also host movie nights, barbecues, and live entertainment events for seniors. 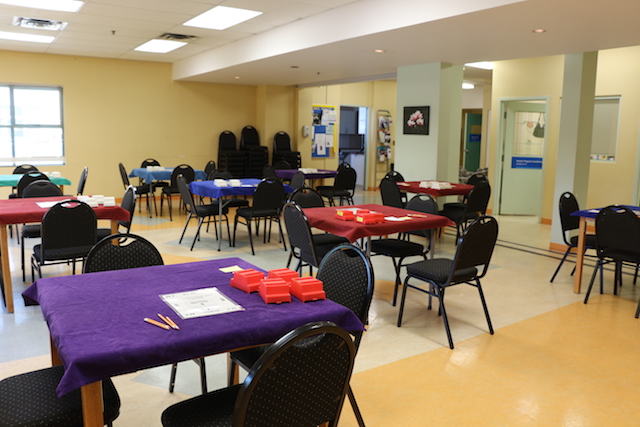 Next stop on my tour was a sit-down with Ayelet Cohen, Israeli and Jewish Culture Coordinator. “Many adults programs are offered such as Hebrew classes, Jewish education, photography, community theatre and much more.” After a quick chat with Ayelet, we passed went down a long corridor, past windows that looked down on the indoor pools, past stacks of sleeping bags and backpacks, and met up with Teens and Youth Coordinator, and Camp Director extraordinaire, Ben Horev. 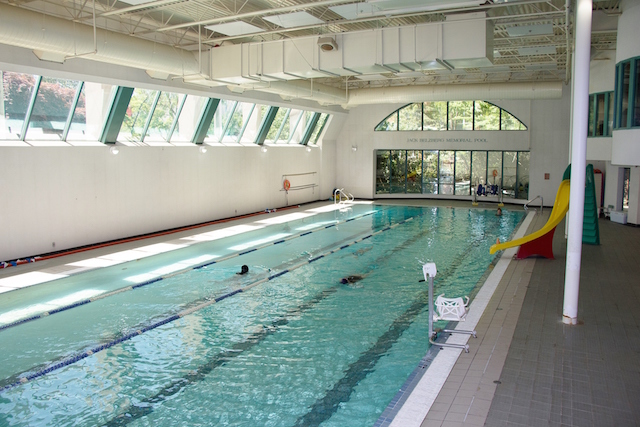 “Should I just talk about camp or all my other famous programs?” Ben asked with a laugh. He had just returned from a meeting about Pokemon Go and was preparing to ship off another round of Camp Shalom campers to Mount Seymour for the night.

“We run all summer long from the beginning to August, then the last two weeks are specialty camps. We don’t like to call it typical day camp because ‘typical’ means ‘boring’ in my eyes. We are a day camp, Jewish oriented, but everyone is welcome. We get a lot of non-Jewish kids, especially in this community because we are surrounded by every culture.” Ben said they had 200 kids in camp this year, which is their biggest year ever.

“Having a bunch of teenagers that want to help raise the next generation of kids is a pretty cool concept.”

Camp programs are for ages 5 to 16, and once youth move on they can join the Councillor in Training and other leadership programs. “There’s nothing like the camp season. It’s exhausting and I’m on my phone answering emails at 5:30 in the morning until midnight and I wouldn’t change anything about it. I love everything that I do here.”

Yesterday was just the beginning of a fun-filled summer! @JCCGVCampShalom is in full swing! #Vancouver #camp #fun pic.twitter.com/F2f5wArJw8

“We have a really good group that always loves being here, and we love being here, so it works out in everyone’s favour.”

From youth outreach at public schools in the community to the Chill Chat peer-to-peer mentorship program and the Gay and Straight Alliance, the youth program is a safe zone within the community for teens.

Moving on from the fun summer vibe that made me nostalgic for my own weeks at camp on the Sunshine Coast as a teen, we had a few more program directors to meet up with. Susan Hoppenfeld, Preschool and Daycare Director showed me around their beautiful backyard gardens and playgrounds and I chatted briefly with Talitha Johnston, Fitness and Lifestyles Director.

“We have a new class coming that’s called Pound, it’s taught with drumsticks,” Talitha told me as we stood in the middle of what could have been a fully professional gym packed with ellipticals, treadmills, and spin bikes. “Basically you’re drumming on your mat, in the air, and doing your fitness cardio that way. You forget that you’re working out and you’re rocking out.”

Zumba, Dance Play, Power Pl3y, pilates, kettle bell, H.I.T.T., bootcamp, and more are all offered along with nutrition, massage, rehabilitation, and more for all ages. Some programs are registered for members, some are open to the public.

Leaving the impressive gym and fitness facilities, and winding through a beautiful yoga studio, we looped back to the front entrance area and took the stairs up to the museum, archives, and library. We caught Christine Jagoe, Events Director, who coordinates the JCC’s successful Sports Dinner gala fundraiser (last year’s keynote speaker was Charles Barkley). 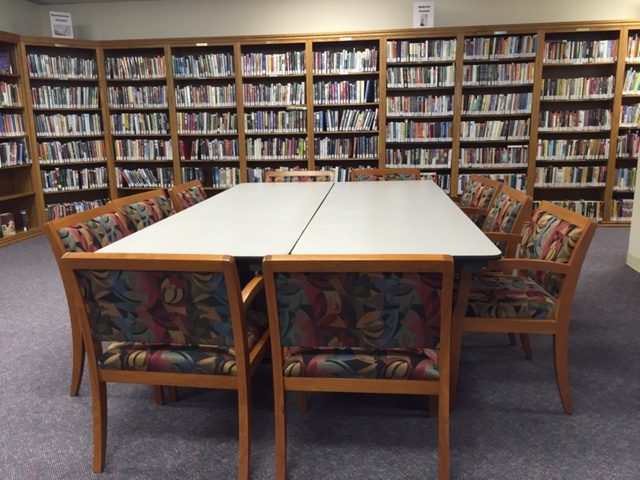 I could have spent hours touring and meeting many more dedicated people but my time ran short and I had to bid farewell to the JCC. Janelle loaded my arms with a gift basket filled with parting gifts and programs, and I passed the auditorium rehearsals one last time.

“5, 6, 7 8!” I may have had a spring in my step as I walked out to my car in the parking lot. It could have been the music, but it was probably the energy I felt being around so many people who are so passionate about what they do for the community around them.