Early Music Vancouver presents its first ever Vancouver Bach Festival, taking place in the heart of the city at the Christ Church Cathedral this August 2nd to 12th, 2016. The festival offers local enthusiasts a veritable ‘Best of’ collection of the German composer’s masterworks, from exquisite chamber music to monumental orchestral undertakings. This is also the first summertime classic music festival of its kind since Music Fest ended in 2013. 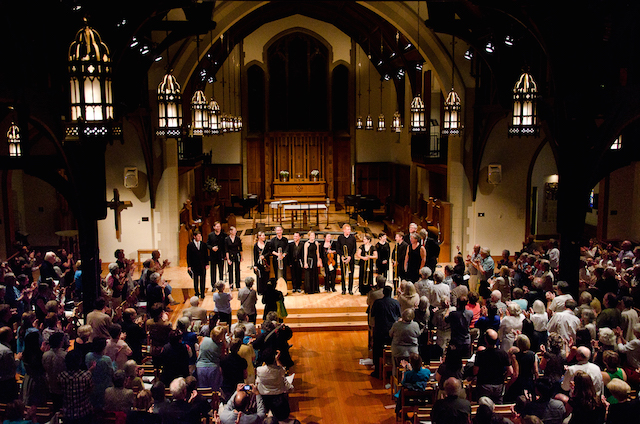 Headlining the programme will be Bach’s crowning achievement – the Mass in B Minor at the Chan Centre on August 5th at 7:30pm. Led by esteemed conductor Alexander Weimann, the performance will feature Montreal’s Arion Baroque Orchestra, and eight internationally-renowned Bach specialists as soloists. This will be EMV’s first presentation of the Mass in B Minor, which will come to Vancouver following its tour in Quebec and Ontario.

Among intimate recital offerings, innovative Jazz pianist Dan Tepfer will find the common ground between Baroque and Jazz with his New York Times praised Goldberg Variations/Variations; Beiliang Zhu, who recently won the International Bach competition in Leipzig, will perform the famed Cello Suites; and esteemed harpsichordist Davitt Moroney will play The Art of the Fugue. The festival will conclude with a performance of Bach’s Orchestral Suites led by Monica Huggett.

Single tickets are available now for all performances ranging from $10 to $67. Enjoy any four concerts of the Vancouver Bach Festival for the price of three. Purchases of more than four concert packages will also receive a 25% discount.

To compliment the artist lineup, EMV will offer an array of thought-provoking film screenings and expert talks, which audiences can enjoy with wine and refreshments in a relaxed atmosphere.

I have a pair of tickets to give away to Mass in B Minor, taking place at the Chan Centre on August 5th at 7:30pm. Here’s how you can enter to win:

I will draw one winner at random from all entries at 12:00pm on Tuesday, July 26, 2016. Follow Early Music Vancouver on Facebook and Twitter for more event information.

Update The winner is Kathleen!

Also on Miss604.com
« Free Screening of The Tragically Hip Concert on CBC at the Commodore in Vancouver
Best Buy Pokémon Go Party in Vancouver »