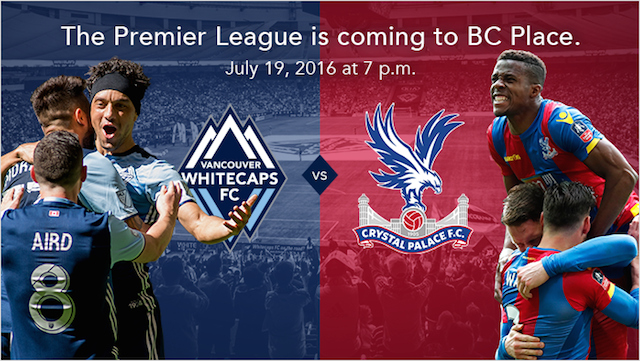 Crystal Palace have five players in the UEFA EURO 2016 semifinals, second most behind only Bayern Munich, and they will be the first English team to come play Whitecaps FC since Manchester City in 2011 – who then went on win the English Premier League that season.

Where: BC Place Stadium, Vancouver
When: Tuesday, July 19, 2016 matches at 7:00pm & 9:00pm
Tickets: Available online now starting at $45 (plus fee). Save up to 35% off the regular priced tickets for this match by purchasing through this link and using the promo code: CP604.

This is a two-for-one ticket as immediately following the match with Crystal Palace, there will be a friendly match between the City of Vancouver (featuring Mayor Gregor Robertson) and the City of Guangzhou (featuring former Chinese national team player Peng Weiguo). This is a part of the Friendship Cities Cup celebrating the sister cities relationship between Vancouver and Guangzhou.

If you would like to attend this night of international soccer match-ups at BC Place, I have a pair of tickets to give away PLUS an exclusive opportunity to meet Crystal Palace FC players* on Sunday, July 17th. The Vancouver Chinese Soccer Association and ProEvents will host this special preview meet & greet at River Rock Casino Resort two days before match day.

Here’s how you can enter to win match tickets and attend the meet & greet:

I will draw one winner at random from all entries at 12:00pm on Wednesday, July 13, 2016. The winner will have the opportunity to *meet all traveling Crystal Palace FC players on Sunday, July 17th and will receive two tickets to the match on July 19th. Follow Whitecaps FC on Twitter, Instagram, and Facebook for more information about the team.

Update The winner is …Jennifer Beeson!