Vancouver’s improv scene is getting an explosive infusion of guest talent this summer as Vancouver TheatreSports (“VTSL”) explores what it means to be a woman in Vancouver. Themes such as dating and romance, career and work/life balance, female friendships and body image will all be examined through the audience suggestions motivating the improvisers’ wicked wit. 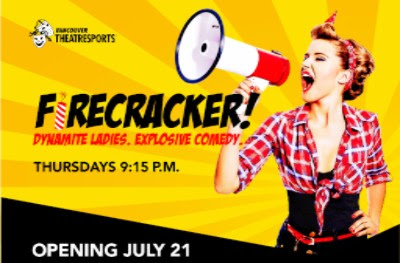 Starting Thursday, July 21st and running every Thursday evening at 9:15pm, VTSL presents Firecracker Dynamite Ladies. Explosive comedy. “One of VTSL’s mandates is to increase the diversity in our company, and in the improv world,” states Executive Director Jay Ono.

“I am very proud of the fact that VTSL’s ensemble includes very strong female improvisers. In addition, almost 50 percent of our Rookie League and Improv Comedy Institute (ICI) are women. This is an exciting time for the development of the art form thanks to these amazing improvisers – they rank among the best anywhere.”

Inaugural shows will honour a special female guests whose stories of their life, work and achievements will inspire the performance. We are delighted to have the following guests join us for these performances:

Subsequent performances may not always include special guest. However, all will celebrate the fun and foibles of female life in early 21st Century Vancouver.

As in all VTSL productions, audience suggestions about the show’s theme will play an integral role in determining and driving the improvised action. All shows are at the Improv Centre on Granville Island. Tickets, priced at only $10 at the Box Office (slightly higher online) are on sale now.

I have a four-pack of tickets to give away to Firecracker Dynamite Ladies on July 21st, where I’ll be on stage! Here’s how you can enter to win:

RT to enter to win @VanTheatreSport tickets from @Miss604 http://ow.ly/BKot3028m8q

Update The winner is Kathe!

Also on Miss604.com
« Music at the Museum: Free at the Surrey Museum This Summer
Bard on the Beach Review Merry Wives of Windsor »