After a successful Canada Sevens tournament we know one thing for sure: Vancouver loves rugby! I grew up playing the sport in high school and to this day the spot holds a special place in my heart. If you caught the rugby fever earlier this spring, you have the opportunity to once again support the Canadian men’s rugby team (15 a side) on June 11th as they take on Japan at BC Place. 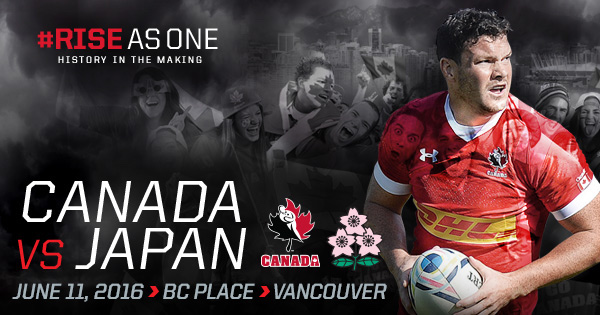 Canadian Men’s Rugby at BC Place

This will be the first time the Canadian 15s men’s squad will have ever played in BC Place Stadium, and if the turn-out from fans around the Men’s Sevens is any indication, our Canadian men can look forward to an electric fan atmosphere.

The Japan-Canada match is the first in the set of three Summer Series matches that will see Canada take on Russia and Italy in Calgary and Toronto respectively. The series is particularly exciting as Team Canada introduces their new head coach, Mark Anscombe, the former New Zealand U-20 coach, who is committed to bringing rugby to the forefront in Canadian sports.

Japan is coming off of a thrilling Rugby World Cup where they knocked off rugby powerhouse South Africa in the pool stages and have begun preparations as they host the 2019 edition of the tournament. Canada has not won against Japan since 2005, and this match has the opportunity to be one of the most crucial matches for Canada. Considered to be traditional rivals, this is a match that will not disappoint.

I have a pair of tickets to give away to the game on June 11th, here’s how you can enter to win:

Update The winner is Shawn!