Arts Umbrella has announced its 2016 Theatre and Music Expressions Festival, an annual showcase celebrating the boundless creativity of young talent in the organization’s pre-professional theatre program, running from May 11 to 22, 2016, at Waterfront Theatre. 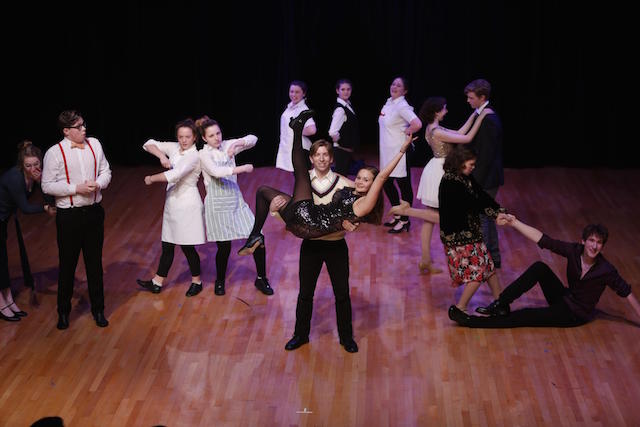 With an expanded festival run of two weeks this year, five wonderfully varied productions highlight the talents of Canada’s next generation of theatre artists, including beloved favourites such as The Drowsy Chaperone and Shakespeare’s Julius Caesar, and student-created originals such as Dangers of a Total War.

To hone their work, student performers have toured the productions in schools across the Lower Mainland, and worked with professional directors and designers. Both innovative and inspiring, the Expressions Festival enables these driven youths to take pride in their accomplishments by sharing their vision and ability with the community.

Dangers of a Total War
Performed by the Laboratory Theatre Troupe
May 12, 21
A powerful, original creation by the Laboratory Theatre Troupe students, Dangers of a Total War explores the hardships and tribulations of children evacuated from England to Canada during World War Two. Taking inspiration from a letter sent by King George to every child of the United Kingdom, the play demonstrates how war touched everyone in the country – and the long-lasting consequences for even its most innocent citizens.

The Drowsy Chaperone
Performed by the Musical Theatre Troupe
May 13, 15, 17, 18, 20, 21, 22
   The charming and multi award-winning The Drowsy Chaperone wryly parodies musical comedies of the 1920s with its “musical within a comedy.” When an antisocial, dedicated theatre fan plays his favourite record, the characters come to life on stage to perform in front of his very eyes. With music and lyrics by Lisa Lambert and Greg Morrison, and book by Bob Martin and Don McKellar, the production is a toe-tapping, knee-slapping whirlwind of talent.

Story Stew: A Fairy Tale Revue
Performed by the Junior Theatre Troupe
May 14, 19, 22
What if the children of the little old woman who lived in a shoe were actually fairy tale characters, such as Jack, Jill, Little Red Riding Hood and Goldilocks? Story Stew by Stacey Lane interweaves familiar folk tales on a delightful romp through Enchanted Forest locations, such as the candy house and magic beanstalk. The Junior Theatre Troupe playfully shares a story of heroic adventure with plenty of twists and turns.

Theatre and Music Showcase
Performed by Theatre Intensive Program students
May 14 and 15 (various times)
One of the highlights of the season, the Theatre and Music Showcase reveals the honed, dynamic talent of the Theatre Intensive Program students through a kaleidoscope of short musical and theatre performances across a range of genres.

The Expressions Festival will run from May 11 to 22, 2016 at the Waterfront Theatre (1412 Cartwright St, Granville Island) with tickets starting at $10.

The Arts Umbrella Pre-Professional Program includes four troupes – Junior, Senior, Laboratory and Musical Theatre – and a Young Directors Program, who train for a minimum of six hours per week throughout the year. Students work with industry professionals to develop both on- and off-stage skills, resulting in many alumni working as professional actors around the world. Follow on Twitter and Facebook for more information.

I have a a family four-pack of tickets to give away to The Drowsy Chaperone on Friday, May 13, at 7:00pm. Here’s how you can enter to win:

RT to enter to win a family 4-pack of Expressions Festival tickets from @artsumbrella @miss604 http://ow.ly/4nojq6

Update The winner is Kiema!

Also on Miss604.com
« Summer at the Magnolia Hotel in Victoria
Family Fun Day at Britannia Mine Museum »