Join Vancouver Craft Beer Week (“VCBW”) for 10 days of the finest ales, tastiest lagers, great food, and the biggest beer festival Western Canada has ever seen! This year VCBW, running May 27th to June 5th, is featuring 12 amazing music acts ready to kick the summer off with a bang. Tickets to all events are extremely limited so get yours now before they’re all gone.

VCBW is hosting over 100 breweries and cideries across North America, pouring over 400 craft beers during the finale festival. This will include a US Brewers Association section filled with craft beers never before seen in Canada, and three new music stages. Partnering with CFOX, there will be 12 musical acts on stage throughout the three days of the festival.

The 7th annual VCBW collaboration brew is an Oceania inspired Saison, Brewed at Steel + Oak. Steel + Oak and Strange Fellows designed the brew, along with the help of 26 other BC breweries. It includes wild harvested Tasmanian Pepperberries, New Zealand hop varietals, fresh cracked pepper, blackberry, currant, raspberry and a hint of zesty citrus. Proceeds from the collaboration brew are going to Music Heals, VCBW’s 2016 charity partner.

Drink select New Belgium beers at Donnelly Group pubs from May 15th to June 15th to fill your passport with stamps. Grab passports from any Donnelly Group pub, on the PNE festival grounds or in the June edition of The Growler. Submit your passport at any of the pubs for your chance to win. Every stamp is worth five entries. You could win a trip to New Belgium Brewing’s Tour de Fat or one of five custom cruiser bikes. 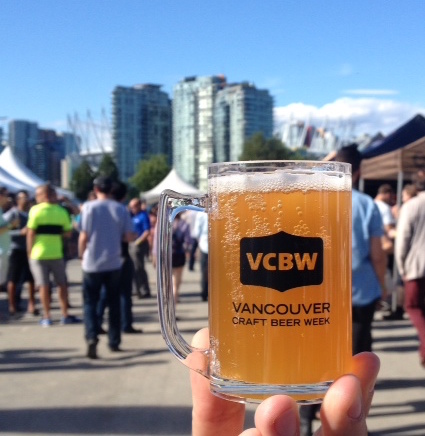 Individual event tickets are on sale now. Note: Many of the events sell out each year!

Festival tickets are now on sale as well, for $30-$95 with individual day or full weekend passes available. Your festival ticket includes entry to the festival and your taster mug. All beer and cider samples are additional. All samples are 4oz and cost 1 token, tokens are $1.50 each.

Share14
Tweet20
Share
Pin
Email
Reddit
WhatsApp
34 Shares
Current Contests on Miss604
*All contests are open to residents of Canada only, unless otherwise stated. Contest timelines are published on each individual post along with entry methods. Some contests may only be open to those 19 years of age and older. Winners are announced on the contest blog posts. Contest policy »
Comments are closed on this post
Advertisement

Also on Miss604.com
« 5 Reasons to Get a car2go This Summer
Summer at the Magnolia Hotel in Victoria »