The 32nd annual Vancouver Sun Run, presented by BlueShore Financial, has been Canada’s largest 10K road race since its inception in 1985 and it’s taking the city by storm again this weekend as tens of thousands of walkers and runners hit the streets on Sunday, April 17, 2016 at 9:00am.

For the first time in The Sun Run’s history, registrants will receive an exclusive hydrolyte technical running shirt with moisture wicking control. Also new for 2016, every registrant will be able to customize their bib to include their name.

The Vancouver Sun put together a very handy e-book where you can find everything you need for Sunday’s event. Here are just a few key points that I’d like to share as well:

Race package pick up for individuals and Shaw Mini Sun Runners will be at The Sun Run Fair located at 765 Pacific Blvd at BC Place Stadium (below Gate D at street level and beside ticketmaster) during the following times:

Competitive (unassisted) wheelchair racers start at 8:40am. Walkers and runners are grouped into waves according to their estimated finish time, and start at timed intervals. The first wave starts at 9:00am and there will be multiple waves. 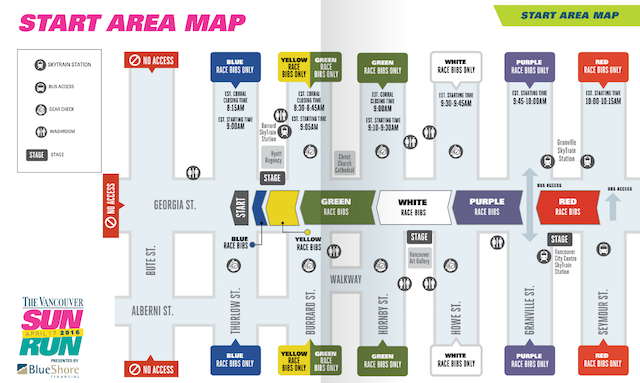 If you are walking, you are encouraged to arrive at 9:00am to ensure that you can access your start zone and partake in all the pre-race festivities. Be aware though, you may not cross the start line until about 9:45am.

Vancouver Sun Run 2016: Getting There

SkyTrain’s Expo and Millennium Lines will start service half an hour earlier, with the first train leaving King George Station at 6:38am and Lougheed Station at 6:45am. Both will operate “rush hour” level service before the start of the race and also in the afternoon until the crowds clear. They will then resume regular Sunday service. Canada Line will begin service at the regular time of 4:48 a.m. and will provide increased train frequency for crowds travelling to and from the race.

The West Coast Express will operate a special Sun Run Train. It will depart Mission City Station at 7:00am. arriving at Waterfront at 8:15am. The train will depart Waterfront Station at 1:00pm. for the return trip. SeaBus will start operations one hour earlier than normal, with the first sailing leaving Lonsdale Quay at 7:00am and sailings leaving every 15 minutes from Waterfront until 2:45pm.

In 2014 & 2015 the Vancovuer Sun Run Charity program was launched, providing registrants the opportunity to raise funds for local charities through our pledging program. Over those 2 years, Sun Run participants have raised over $60,000 for seven excellent charities. Partner charities for 2016 include: BC Children’s Hospital; The Heart and Stroke Foundation of Canada; BC SPCA; BC Cancer Foundation; Dr. Peter AIDS Foundation; Ronald McDonald House British Columbia; Free the Children.

The 10K course starts at Georgia and Burrard and will be lined with water stations and live musical performers. For the safety of the 40,000 participants, various road closures will be in effect between 5:00am and 1:30pm. These closures may restrict parking and access to and from your building. 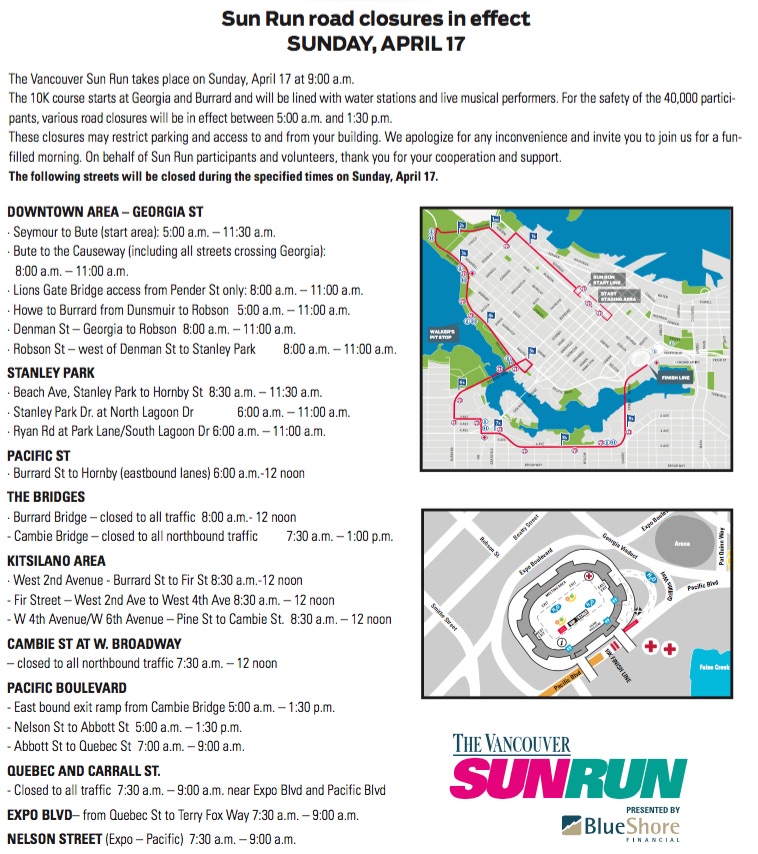 You don’t need to be a runner, a jogger or a walker to have fun. Bring along the family or a friend to watch the race from the sidelines, and join in the fun and festivities on the course and at the finish line. The party starts at BC Place at 8:30am, just in time to entertain the Shaw Mini Sun Runners and the first of the elite runners crossing the finish line at about 9:30am.

Along the route participants will enjoy music from: The Neurotics performing at the event’s Main stage at Georgia and Burrard as well as returning favorites Bad Motor Scooter and Top Line Vocal Collective. The BC Regiment Band will perform in front of the Seaforth Armory and the Spakwus Slulum / Eagle Song Dancers will represent the Squamish Nation located at Fir and 2nd.

Follow the Vancouver Sun Run on Twitter and Facebook for more up-to-date information and instructions. Online registration is now closed but you can still sign up at the Sun Run Fair on April 15th and 16th.