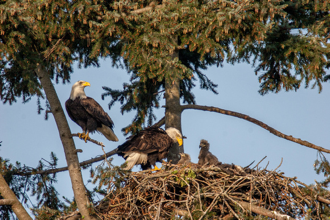 Urban bald eagle populations have been on the rise over the last 20 years with over 10 active breeding pairs in the Metro Vancouver area. This spring Stanley Park Ecology Society is set to re-launch its Bald Eagle Monitoring Program.

From 2004 to 2014, SPES kept track of the number of active nests throughout Stanley Park. After a year hiatus, SPES Conservation Projects Manager Maria Egerton and Conservation Technician Paul Higginson, along with two Environmental Monitoring Students from Squamish Nation Trades Centre, are keeping a close eye this year on four active nests in Stanley Park. The SPES team is tracking how many breeding pairs have returned to their nests and the number of eaglets that may hatch. 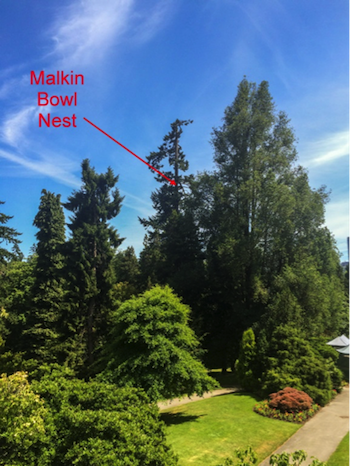 Eagles have returned again this year
to their Malkin Bowl nest

Near SPES’ offices in the Stanley Park Dining Pavilion, a pair of bald eagles have been treating staff to their breeding antics and calls by their nest near Malkin Bowl . Now is the time of year when eagles lay their eggs and SPES staff eagerly anticipates that first glimpse of an eaglet poking its head up above the nest edge. Like most Vancouverites, eagles are very concerned with real estate – preferring to nest in the tallest tree available.

Once a suitable location has been found, both males and females work together building the nest with sticks and twigs; this is an essential part of their pair bonding ritual. Eagles have strong nest site fidelity, often returning to the same nest and nesting territory each year. If they successfully produce young at a nest, they are more likely to return to that nest the following year.

A typical nest like the one near the Stanley Park Dining Pavilion may contain 1-3 eggs. Both male and female birds take turns brooding, sitting on the eggs for up to 35 days before they hatch. Once born, the young eaglets will stay in the nest for about 11 to 12 weeks. Around this time their downy feathers are replaced by juvenile feathers and soon they will begin to practice the fine art of flying on their own. Typically only half of the eaglets born will survive to fledge, so naturally the parents guard the nest very closely taking to turns to hunt for food. 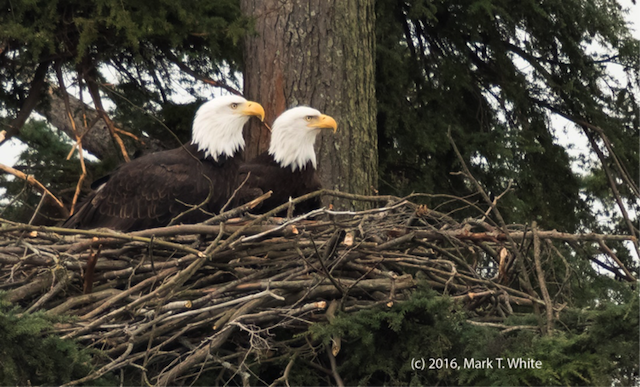 The next time you are in Stanley Park and looking to spot eagles in action, the nest across from the baseball diamond just west of Prospect Point may be your best viewing option. A breeding pair has set up shop in a tall hemlock on the downward side of the slope. From this vantage point it is possible to see directly into the nest without the aid of binoculars, so be sure to have your camera ready.

Share12
Tweet13
Share
Pin
Email
Reddit
WhatsApp
25 Shares
Current Contests on Miss604
*All contests are open to residents of Canada only, unless otherwise stated. Contest timelines are published on each individual post along with entry methods. Some contests may only be open to those 19 years of age and older. Winners are announced on the contest blog posts. Contest policy »