Canada’s Royal Winnipeg Ballet presents a poignant tale of hope and understanding in Vancouver with the premiere of Going Home Star. This heartrending ballet pays tribute to the experiences of residential school survivors and opens up an important dialogue about truth and reconciliation. 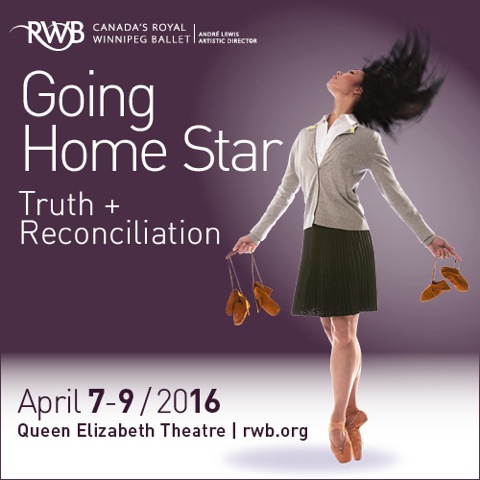 But when she meets Gordon, a longhaired trickster disguised as a homeless man, she’s propelled into a world she’s always sensed but never seen. Not only do they travel the streets of this place but also the roads of their ancestors, learning to accept the other’s burdens as the two walk through the past and toward the future. Together, both Annie and Gordon learn that without truth, there is no reconciliation.

“Going Home Star is without question one of the most important productions in the RWB’s 75 year history. We feel immensely honoured to have been entrusted with this story – and to use the ethereal beauty of ballet to further an imperative dialogue around truth and reconciliation,” says André Lewis, RWB Artistic Director. “Born from a collaboration between some of Canada’s finest creative minds, it is a gorgeously raw, exquisitely honest work whose artistry and message will resonate in the hearts of all Canadians.”

Receiving widespread acclaim, Going Home Star is a powerful production that bravely faces the pains and atrocities of Canada’s past, while giving hope for healing and wholeness in our future.

I have a prize pack available for this show thanks to the Royal Winnipeg Ballet that includes:

Update The winner is Laura!

Also on Miss604.com
« Vancouver Cherry Blossom Photo of the Day
Surrey Party for the Planet 2016 »