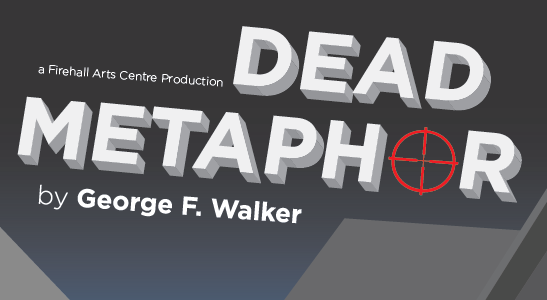 A recipient of the Order of Canada, George F. Walker (Suburban Motel, Escape from Happiness, Nothing Sacred) is one of Canada’s most prolific and celebrated playwrights. Directed by Chelsea Haberlin, the dark comedy Dead Metaphor introduces us to a young ex-sniper Dean, who has recently returned to Canada from Afghanistan and is struggling to find work in a job market for which his ‘talents’ as a marksman aren’t exactly in demand.

As Dean contends with ageing parents Hank and Frannie, and a pregnant ex-wife Jenny, he becomes an assistant to the contemptuous politician Helen. When moral values collide, Dean finds himself persuaded to lend his talents as a sharpshooter, in the ideological war at home. Rife with sardonic humour and twists, Dead Metaphor is daring, hilarious and enthralling.

I have a pair of tickets to give away for opening night of Dead Metaphor on April 6th at 8:00pm. Here’s how you can enter to win:

RT to enter to win tickets to Dead Metaphor at @FirehallArtsCte from @Miss604 http://ow.ly/ZUzEs

I will draw one winner at random from all entries at 12:00pm on Tuesday, March 29, 2016. Follow The Firehall Arts Centre on Twitter, and Facebook to learn more about this production and more.