The JFL NorthWest Comedy Fest is bringing some of comedy’s top talent to Vancouver this month including the incomparable Wanda Sykes. 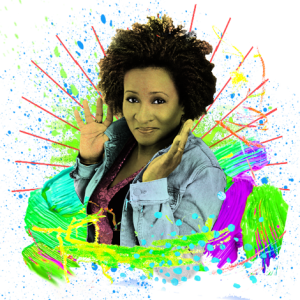 Wanda Sykes has been called “one of the funniest stand-up comics” by her peers and ranks among Entertainment Weekly’s 25 Funniest People in America. Her smart-witted stand up has sent her career in many different areas.

Sykes’ first book titled Yeah, I Said It, published by Simon and Schuster, hit bookstores in September 2004. Yeah, I Said It is a hilarious collection of essays touching on life, family and current events. In 2012 Wanda joined forces with veteran producer Page Hurwitz to form Push It Productions, a production company dedicated to creating quality, comedy-based programming for network and cable television outlets. The company’s diverse slate of projects includes sketch comedy, concerts, reality, talk/variety, and competition formats. Their first set of specials, Herlarious aired in summer of 2013 and January 2014 on Own and was the recipient of a 2014 Gracie Award.

Sykes was previously seen on several television shows over the past few years. She can currently be seen on the Amazon Prime show Alpha House created by Gary Trudeau about a group of Republican Senators who share the same DC rental house; Last year she made a return to HBO’s Curb Your Enthusiasm; she also spent five years on CBS’s New Adventures of Old Christine. In 2010 she starred on her own late night talk show on FOX, The Wanda Sykes Show. Other TV credits include Fox’s Wanda at Large which she wrote, produced and starred in; Wanda Does It on Comedy Central and on Crank Yankers as the voice of Gladys Murphy.

She can be heard in many animated feature films; Ice Age: Continental Drift as ‘Granny’; in FOX’s Rio as ‘the Goose’; in Dreamworks’ Over the Hedge and Paramount’s The Barnyard.

Sykes was also seen in the feature films Evan Almighty, the sequel to Bruce Almighty, in which she co-starred with Steve Carell; the New Line feature Monster-In-Law starring opposite Jane Fonda, My Super Ex-Girlfriend, Pootie Tang, Nutty Professor 2; The Klumps, and Down to Earth.

I have a pair of tickets to give away to her show in Vancouver on February 24th, here’s how you can enter to win:

RT to enter to win tickets to see Wanda Sykes in Vancouver from @JFLNorthwest + @Miss604 http://ow.ly/XWP6H

I will draw one winner at random from all entries at 12:00pm on Wednesday, February 10, 2016. Follow the JFL NorthWest Comedy Fest on Twitter and Facebook for the latest festival news and lineup announcements.

Update The winner is Patricia!

Also on Miss604.com
« Yoga Date Night at YYoga
Pride and Prejudice at The Arts Club »