Today is Safer Internet Day, an initiative focused on reducing cyberbullying and promoting responsible Internet use.

When I was growing up, bullying involved punching, shoving, teasing, spreading bad rumours, keeping certain people out of a group, and getting certain people to “gang-up” on others. Now, with so many more ways to communicate online and through mobile devices, there’s a whole other way to spread negativity through cyberbullying.

25% of kids in Canada between 12-15 have witnessed cyberbullying and 51% of all teens have had negative experience with social networking.

The scary part is, for me, that a lot of it stems from trust. You trust someone by sending them a private message and then it becomes public. According to cyberbullying statistics*, “the most commonly experienced form of cyberbullying is when someone takes a private email, IM, or text message and forwards it to someone else or posts the communication publicly.”

Safer Internet Day is celebrated worldwide each February to promote responsible digital citizenship among children and youth, as well as safer use of online platforms, technology and mobile phone. Participants are encouraged to raise awareness about the importance of online safety by tweeting and posting using the hashtags #SID2016 and #Up2Us. Throughout February, you can also take part in the Pink Shirt Promises campaign.

For over 20 years, Shaw has partnered with leading Canadian organizations that provide award-winning programs and resources on anti-bullying, online safety, and digital literacy.

Starting today, Shaw is asking Canadians to work toward ending bullying by spreading positive messages in the stand against bullying by making a #PinkyPromise or a #PinkShirtPromise to specific friends on their social media channels leading up to and during Pink Shirt Day on February 24, 2016. 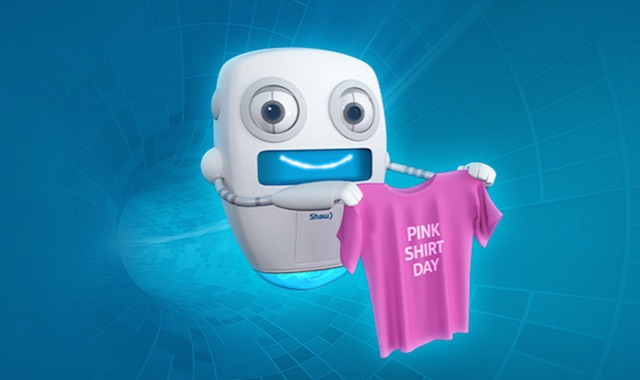 The campaign kicks off today, February 9th in conjunction with the Canadian Centre for Child Protection’s Safer Internet Day, and continues until Pink Shirt Day on February 24th. Here’s how you can participate:

You can also make your #PinkShirtPromise by posting the following on social media:

For every promise and pinky promise made, participates in the campaign will be entered for a chance to win an ET Canada Experience, which includes flights for two to Toronto and two nights hotel accommodation, and a $1,500 dollar shopping spree at a participating shopping centre.

“Bullying is one of the most common concerns we hear about at Kids Help Phone, and the effect that is had on young people—both emotionally and physically—is significant, regardless of whether they are being bullied or doing the bullying. We’re proud to stand in partnership with Shaw Communications to make a #PinkShirtPromise, and create safer and friendlier communities for all kids in Canada.” Sharon Wood, President and Chief Executive Officer, Kids Help Phone

Share1
Tweet1
Share
Pin
Email
Reddit
WhatsApp
2 Shares
Current Contests on Miss604
*All contests are open to residents of Canada only, unless otherwise stated. Contest timelines are published on each individual post along with entry methods. Some contests may only be open to those 19 years of age and older. Winners are announced on the contest blog posts. Contest policy »