This post has been contributed by Michael Murray, Communications Volunteer with the Stanley Park Ecology Society (“SPES”). I have been following SPES since I moved into the West End a decade ago and I have been a member for three years. I wanted to offer the team an opportunity to share their news, events, and work so I have created “SPES Saturday” where they contribute and share stories with my audience once a month. 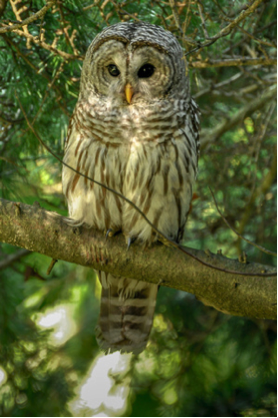 “Who’s awake? Me, too!” This haunting call echoed through trees near the Stanley Park miniature railway last month startling SPES Conservation Technician Paul Higginson as he worked nearby.

Paul is used to hearing “Who cooks for you? Who cooks for you all?” from the more common Barred Owl. This time, however, it was a Great Horned Owl seeking a mate. Along with the Barred Owl and the seldom seen Western Screech Owl, these elusive raptors patrol the forests of Stanley Park as they hunt for prey and call for mates. Love is in the air not only for people this Valentine’s Day, but for owls, too.

Of the three species of owls found in Stanley Park, the most common is the Barred Owl; with its distinctive grey and brown plumage and huge dark eyes, these owls are truly a sight to behold. Typically roosting on tree branches during the daylight hours, the Barred Owls become more active at night hunting for rodents, insects and other smaller birds. As the weather warms and the days become longer, their attention shifts to finding a mate. Courtship usually begins in February and nest occupancy can run from the latter part of March through mid-August. If you’re lucky enough to spot a breeding pair they’ve probably been together for a while as Barred Owls are considered to be monogamous and mate for life. 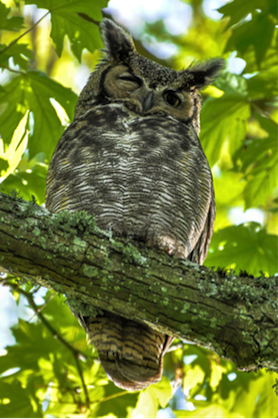 While beautiful, the Great Horned Owl is a fearsome predator, taking down prey larger than itself and even dining on other owls. Female Great Horned Owls are slightly larger than their male companions. What the males lack in size they make up for in voice, with a deep loud resonating hooting call. They can often be heard hooting together in unison warning other owls to stay clear of their territory.

The Western Screech Owl, including the provincially blue listed (threatened) Kennicottii subspecies, is the smallest and rarest owl to call Stanley Park home. 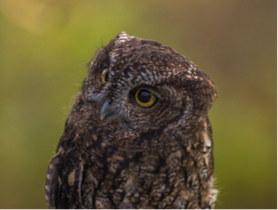 Topping out at under 25 cm high with grey and brown striped feathers that blend into the landscape, these tiny owls can be difficult to spot. They prefer to nest in old growth forests but also thrive in riparian habitats as well as forests along the edges of clearings, rivers and lakes including Beaver Lake.

Threats from larger owl species taking their territory could spell the end for the Western Screech Owl in Stanley Park.

Owls have long been revered for their beauty and grace, so next time you’re walking the trails of Stanley Park look up and keep your ears open; you might be lucky enough to spot or hear one – especially at this time of year when hooting to attract mates increases during nesting season.

Share35
Tweet4
Share
Pin6
Email
Reddit
WhatsApp
45 Shares
Current Contests on Miss604
*All contests are open to residents of Canada only, unless otherwise stated. Contest timelines are published on each individual post along with entry methods. Some contests may only be open to those 19 years of age and older. Winners are announced on the contest blog posts. Contest policy »