The CiTR Fundrive is on now, appealing to listeners to raise $40,000 to grow more media producers. The theme for this year’s Fundrive, for independent broadcaster and publisher CiTR 101.9FM, is ‘Growing Our Cultures’, which asks listeners, family and friends to support training and development opportunities at CiTR and Discorder Magazine.

Until 9:30 pm on March 3rd, CiTR DJs will be urging listeners day and night to call in or visit the website to donate. You can also support the campaign by attending the Fundrive Finale on Friday, March 4, 2016 which doubles as a release party for the CiTR Pop Alliance Compilation, Vol. 4 LP. 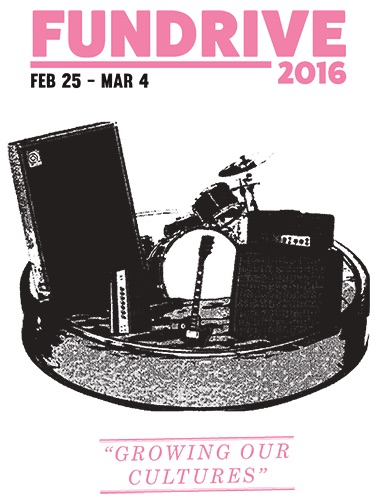 “With so many communities and cultures represented on our radio, whether it’s language or genre, CiTR is already supporting the multitude of niches that exist in Vancouver,” explains Brenda Grunau, Station Manager. Through this year’s Fundrive, we want to invest more in training and development to grow more writers, more broadcasters, and improve the quality of our on-air programming.”

Every day, CiTR signs up new members, teaches them how to use microphones, edit audio, write about music and cover topics vital to the local community. Last year, CiTR offered 386 hours of training and 7 workshops to 450 students and community members interested in sharing their music, stories and local perspectives. More training and support means better programs – better research, better audio, deeper analysis, more informative and entertaining — all from an independent, local perspective.

Local, independent media is so important to our culture as a city, and as someone who married a college radio personality and engineer ten years ago, I know the positive, lasting impact this type of organization can have on someone.

You can donate to CiTR’s Fundrive online or by calling 604-822-8648 (UBC-UNIT). Donors will receive Fundrive swag, including CiTR & Discorder growlers, notebooks and tote bags, and special show prizes.

CiTR also teamed up with Mint Records to release another record on Friday, February 26th – the CiTR Pop Alliance Compilation, Vol. 4. The fourth instalment of the Pop Alliance series, this compilation was curated by a team of CiTR DJs who picked 11 Vancouver bands to fill the album’s waxy grooves. Only 500 of these vinyl LPs will be pressed, available during and after CiTR’s annual Fundrive for $15, with proceeds going to the Fundrive total. Order an LP or digital download here.

This year’s Fundrive Finale will be the release party for the Pop Alliance Vol. 4 LP, with performances by bands on the compilation including Mourning Coup, Stefana Fratila, Late Spring, Ora Cogan, Ace Martens, Jerk Jails and Cult Babies. The Fundrive Finale will also feature CiTR DJs and a silent auction at the Hindenburg, 23 West Cordova, on Friday, March 4. Tickets are $10 online and $12 at the door.