The snow may not arrive in Downtown Vancouver this Christmas but when you snap a #ChairLiftSelfie by December 28th, you could win one of Tourism Whistler‘s instant prizes including a Whistler Blackcomb season’s pass! 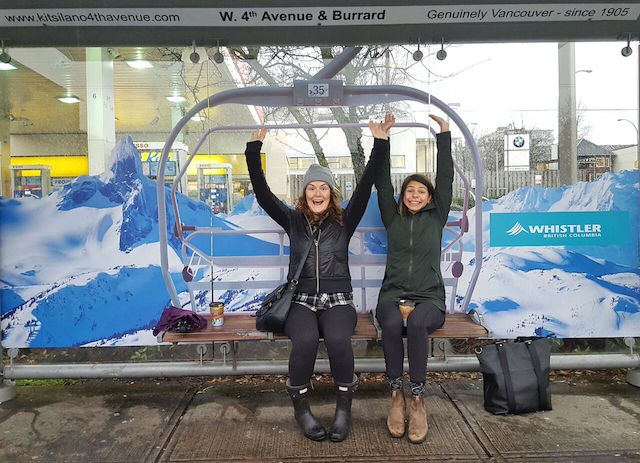 This season marks the 50th anniversary of Whistler Blackcomb and to celebrate, Tourism Whistler is offering 50 instant prizes and a chance to win a Whistler season pass.

Snap a #ChairLiftSelfie at the Whistler-themed bus shelter which is next to Comor – Go Play Outside on West 4th near Burrard, and post it to Twitter or Instagram with the #ChairLiftSelfie hashtag for a chance to win a free Whistler season pass.

To celebrate the 50th anniversary, and to encourage your own #ChairLiftSelfie entries, I have two x single day lift tickets for Whistler Blackcomb to give away. Here’s how you can enter to win:

Be sure to grab your #ChairLiftSelfie before December 28th as well for a chance to win a season pass for Whistler Blackcomb. The bus shelter “chair lift” is next to Comor and in front of the Esso station on West 4th near Burrard. I will draw my winner of two single day lift tickets on Monday, December 28, 2015 at 12:00pm.