This post has been contributed by Samuel Cousins, Stewardship Coordinator Stanley Park Ecology Society (“SPES”). I have been following SPES since I moved into the West End a decade ago and I have been a member for three years. I wanted to offer the team an opportunity to share their news, events, and work so I have created “SPES Saturday” where they contribute and share stories with my audience once a month.

Sweeping Away the Broom

Last week, the Vancouver Park Board and the Stanley Park Ecology Society celebrated a milestone of sorts: the last patch of Scotch broom in Stanley Park, located on the inaccessible west facing cliffs above the sea wall, was removed. Tom McIllfaterick, SPES board member and long time volunteer on SPES’ Special Invasives Removal Team, had said, “…to get that down we would need a cherry picker, harnesses and rope. Each year it gets bigger and bigger, like it’s taunting us from its place of safety.” 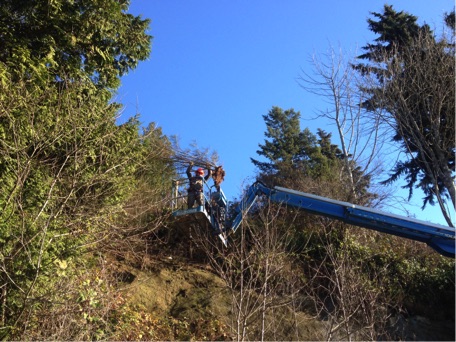 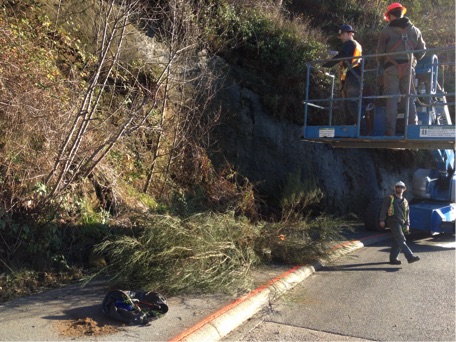 However, in partnership with the Vancouver Park Board’s annual scaling operations on the cliffs, the work team was able to use a cherry picker crane to successfully remove the last of this tenacious invasive plant. The area, though, will still have to be monitored for many years to come. Scotch broom is one of the most hardy and invasive of any invasive plants to hit our shores… and we can thank one person for that.

In 1850 a Scottish captain by the name of Walter Grant landed on the shores of Vancouver Island in the area now known as Sooke. Upon landing, Grant proceeded to shoot and kill a “buffalo”, only for it to be a dairy cow. He also introduced the sport of cricket, though it didn’t really catch on. Nevertheless, in the three short years Grant lived on the Island he managed to leave behind a legacy that can be seen across Canada and the US, though not in sport or bovine identification. 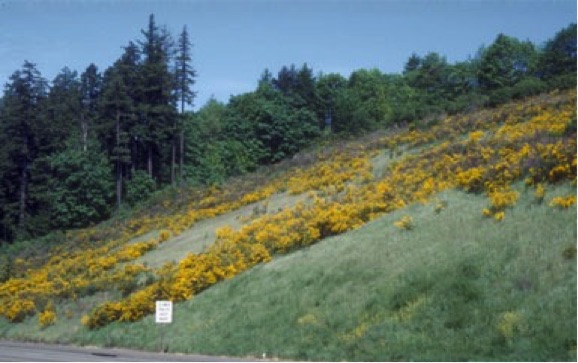 Scotch broom along a highway
(Photo by USGS via Wikimedia Commons)

Captain Grant’s infamous legacy is the introduction of the invasive species Scotch broom and its impacts on the environment we see today. Grant planted Scotch broom to remind him of his Scottish homeland. The weed was then also used as a highway stabilization plant, which only helped it spread further. Well-intended acts like these are the groundwork upon which an invasive species is able to quickly spread, and then with its competitive advantages, outcompete native species.

Scotch broom is a woody weed that has a number of competitive advantages. A mature broom plant can produce around 20,000 seeds a year, which remain viable in the soil for 30 years. It has a large taproot, small leaf area and waxy stems that photosynthesize, making it a very drought tolerant species. Its greatest advantage is that it increases the acidity of its surrounding soil deterring other native species from settling in. 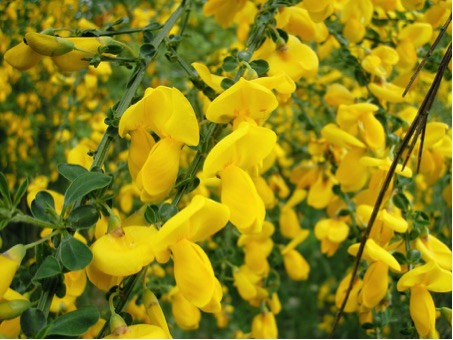 Scotch broom in bloom (Photo by By Danny S.)
via Wikimedia Commons)

The problem with all invasive species is that that they reduce bio-diversity and create mono-cultures as they out-compete the native species. They also impact agricultural production, increase fire hazards and pose a risk to infrastructure. The only good thing about Scotch broom is its bright yellow, snapdragon-like flowers.

Here in Stanley Park, the Stanley Park Ecology Society is actively involved in the management of invasive species through community stewardship. At the last count, there were 109 invasive species identified, the main ones being English ivy and Himalayan blackberry. SPES’ volunteer-driven Special Invasives Response Team (“SIRT”) has been monitoring and removing invasive species for a number of years, and the task can often become daunting with the amount of work to be done.

With millions of people going through the park each year, seeds from other areas will be carried into the park unintentionally. There will always be the potential for different invasive species to be introduced and threaten the biodiversity of Stanley Park. Even though here at SPES we are proud to say that Scotch broom has been completely removed from the Park, we want to be proven wrong.

If you see Scotch broom, please report it to the SPES stewardship coordinator ([email protected]) and a team will be dispatched to investigate. You can also do your part and join one of the SIRT volunteer events by registering with the stewardship coordinator. Together we can work to remove invasive species from the Park.

In the meantime let us raise a glass of scotch, not to Captain Grant, but to the efforts of the invasive species removal teams, societies and organizations that are still dealing with the management of invasive species in their regions. Sometimes the small victories are worth celebrating.