You really can’t go wrong with a classic date night that consists of a dinner-and-show, and when the local restaurant community supports theatregoers, it’s just that much better. I recently had two date nights ahead of two Arts Club holiday shows, and each was just lovely.

I was going to be away for my sister’s birthday this year so I invited her to It’s a Wonderful Life at the Arts Club’s Granville Island stage. I arrived at 5:30, when the box office opened, to pick up our tickets then I walked over to the Edible Canada bistro where I had made pre-show reservations. At the table, I was handed menus including a “Theatre Express Menu“. 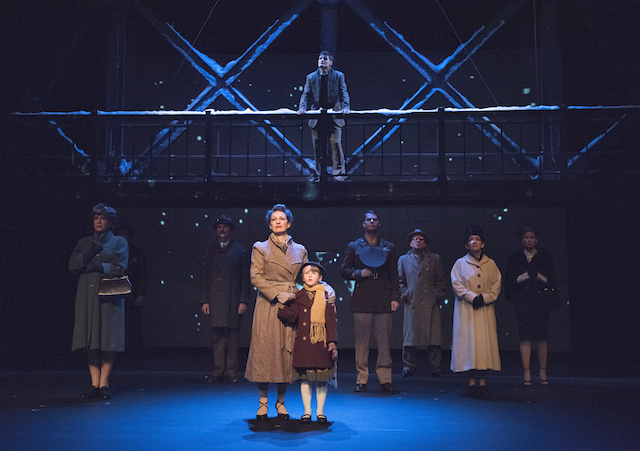 The cast of It’s a Wonderful Life. Photo by David Cooper.

This prix-fixe ($35), three course offering was crafted specifically for theatregoers. “Designed to take you from the first bite to the box office,” my sister and I indulged and had plenty of time to enjoy our selections: Vancouver Farmer’s Salad, Ling Cod, and Maple Bread Pudding. We could have also selected the Hazelmere organic soup, the butternut squash risotto or bison bourguignon, and the artisinal cheese plate.

Paired with a couple glasses of bubbly to celebrate her upcoming birthday, we finished our meals with plenty of time left over to walk to the theatre and pre-order our intermission drinks.

I haven’t seen the Arts Club’s It’s a Wonderful Life in several years and I was very impressed by the production quality. I loved that clips from the old black and white movie by Frank Capra ran on a screen at the back of the stage, even supplying opening credits for the players. It’s a story I have seen and heard a dozen times but I absorbed much more of the history of the characters this time around.

Bob Frazer is a compelling George Bailey, Jennifer Lines is lovely as Mary Bailey, and Kyle Jesperson deserves recognition for playing a handful of characters throughout the story. I really enjoyed Irene Karas as Tilly as well, a person that never really stood out to me before.

It’s a Wonderful Life is not a simple “Christmas” production, but it evokes joy through the power of its characters and the delight of their undying passion for all they believe in.

A Christmas Story: The Musical at The Stanley

I can’t get John to join me for many musical productions but when I told him that a film that “defined most of his childhood” was adapted into a Broadway production, he was definitely curious. We met up with friends for a double date night on South Granville ahead of A Christmas Story: The Musical at The Stanley Theatre. Again, we stopped in at the box office to pick up our tickets before walking over to Luke’s for a pre-show meal. 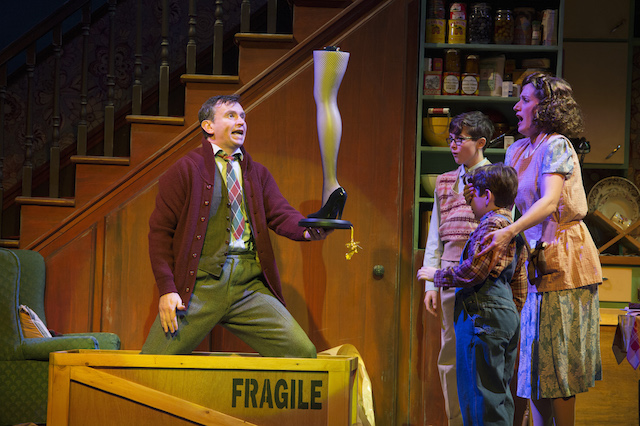 The cast of A Christmas Story: The Musical. Photo by David Cooper.

Luke’s Corner Bar & Kitchen offers 15% off food for those going to Arts Club shows that night and we took advantage of the deal. Our meals were delivered promptly and with some time remaining before we had to be in our seats, we made one more stop before the show.

The friends we were with were craving a good (great) cocktail and I said it would be hard to beat West, which was just down the street from where we were. We sidled up to the bar and perused their booklets filled with mixology masterpieces. My friend swivelled her barstool and saluted me with her cocktail glass and said: “This is the best drink I have had in a very long time.” Sipping every last drop, we grabbed our coats from the check room and headed for the marquee of the Stanley. Note: West also offers an early, prix-fixe menu for the theatre crowd.

Once again the production quality was impeccable, with set design, lighting, and visual effects that enhanced the stage version of a film we all know so well. We were so curious to see how it would be adapted for the stage and while it wasn’t 100% true to the original story, it was definitely an entertaining production.

You get to delve deep into the mind of the father character (Mr Parker), and even the teacher (Ms Shields). We laughed out loud, seeing scenes come to life in a vibrant way, through song and dance, and adored the children who portrayed Ralphie, Randy, Schwartz, Flick, and their fellow students.

If you love A Christmas Story the movie, which you’ll probably see on television about 20 times this season, treat yourself (and your friends, family) by enjoying this new adaptation on stage at the Stanley. It’s not the full movie (for example the Little Orphan Annie timeline is completely omitted) but what it took out it added with hilarious dance numbers and songs. “You’ll shoot your eye out!”.

This season, get in the holiday spirit by exploring a neighbourhood through its restaurants and theatres, enjoying talented local performers presenting classic tales in a new and exciting way.

A Christmas Story: The Musical is playing until December 27th and It’s a Wonderful Life is on until December 26th. Follow the Arts Club on Facebook and Twitter to learn more.