Just as the city changes throughout the year, sprinkling cherry blossoms around like confetti or blowing yellow leaves down to reach the flow of the rain as it hits the earth, so can a person. Michelle Kim‘s The Tree Inside is a dramatic feature film that will be screening at the Vancouver Asian Film Festival this week and it chronicles the emotional life of one women through every season of the year. 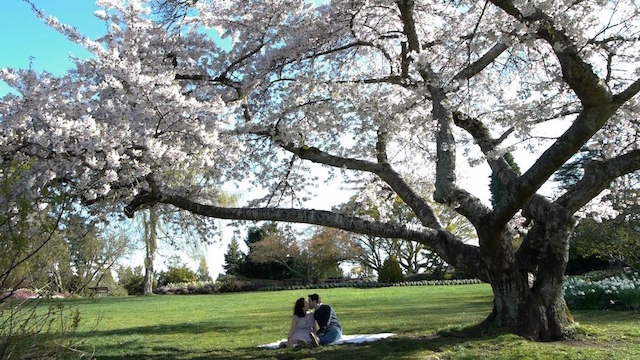 “I think the truth telling in this film involves ideas of loss and heartbreak.”

The film follows a woman (Kim) who can’t keep a relationship for longer than a few months. When she meets the man of her dreams (Manderson), she needs to fight against her seasonal impulse to change. Kim drew from from her own personal struggles to make the film.

“I made this film for therapeutic reasons…thought I didn’t know it at the time,” says Kim, whom I have actually known for 30 years worth of seasons as we grew up together — and you may recognize her as being a guest author on Miss604.

“I was trying to get over not just one relationship, but a series of failures in my love life and come to terms with relationship endings. Sometimes, I think it would have been a lot cheaper to have just gone to therapy.”

Shot in Vancouver — a city that they say never plays itself — over 12 months, The Tree Inside captures the seasons that ebb and flow with the woman’s changes of heart.

“When you’re making independent film in Vancouver, you basically need a team, which becomes your family. Luckily, over the years, Rob (Leickner) and I have found wonderful friends to work with and so there is always that support.” Kim is no stranger to being in front of the camera, or the driving force behind it, however The Tree Inside is her directorial debut. She credits Vancouver organizations such as Women in Film, as well as equipment houses like William F. White’s for their support of local filmmakers, in particular those who are independent and continue to grow in Vancouver, telling their stories here.

Nominated “Best Feature film” at The Green Film Festival in Seoul, South Korea, The Tree Inside will debut in Vancouver on Friday, November 6th, 2015 at the Vancouver Asian Film Festival. Tickets are available now for the screening at 5:00pm at Cineplex Odeon International Village Cinemas.