I enlisted talented local photographer Clayton Perry to help me share some tips for capturing some of the most popular types of photos we see of our fair city. This is the third post in a three-part “How to Photograph Vancouver” series sponsored by London Drugs.

How to Photograph Science World at Night 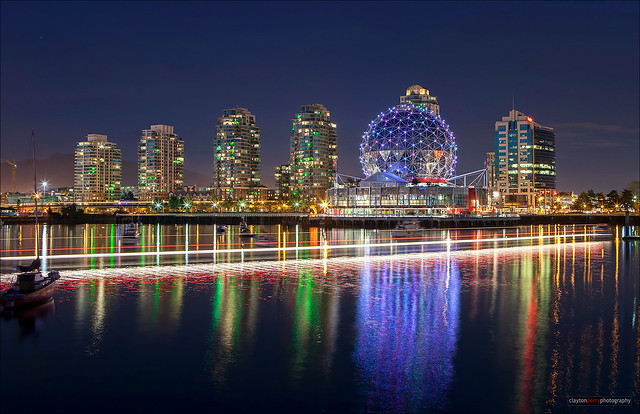 Where was this photo taken?
Both of these images are taken from the seawall at the Village at False Creek (Olympic Village).

Is any extra equipment needed?
Ensure you are using a tripod and a shutter release cord (or remote control). This allows you the longer shutter speeds needed for the light stream from the False Creek Ferries as they sail on by.

What is your top tip for getting this image?
My top tip for this shot as with any night shot is to use your tripod and shutter release cord and as always, dress warm, once the sun goes down, night shooting can get chilly.

Vancouver-based photographer Clayton Perry was born on Vancouver Island and moved to the lower mainland in the late 1960s. He spent most of his childhood summers either in Sproat Lake near Port Alberni, Lake Okanagan while vacationing in Penticton, Victoria BC or his hometown of Richmond, British Columbia. He developed his skills around BC slowly developing a massive database consisting of over 45,000 images on Flickr alone. His passion lies in taking landscape and city images. Follow Clayton on Facebook and Twitter for more of his photography.

Also on Miss604.com
« The Holidays at Highstreet in Abbotsford
New Lumiere Festival in Vancouver »