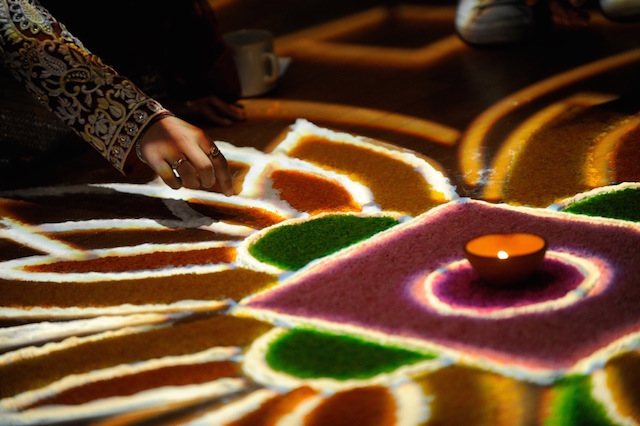 Diwali Downtown is one of the main events of the festival and a key attraction, drawing thousands of people from all demographics for a South Asian cultural extravaganza. Diwali Downtown is a free event that brings together the best of contemporary and classical Indian culture for the entire family. This year’s event will include over fifteen different music and dance performances, an Indian bazaar featuring South Asian crafts and cuisine, and a room-sized rangoli.

Returning by popular demand and at the request of the City of Surrey, Diwali Fest is pleased to once again bring its landmark event, “Diwali Downtown”, to the Surrey audience. This is also a free and family-friendly event.

When: Throughout the festival
Where: Various venues in Vancouver

These free workshops feature professional artists and facilitators who lead the group in rangoli design, diya lamp painting, Bollywood dancing, sari wrapping, and mehndi hand painting. This year’s festival will also include workshops on storytelling, poetry, yoga, and roundtable discussions on the history of Diwali.

Event: Diwali at the Library
When: November 4th, 2015
Where: Vancouver Public Library, Vancouver

Diwali on The Drive

In partnership with one of the leading presenters of Theatre in the City of Vancouver, The Cultch, Diwali Fest will incorporate South Asian-themed Theatre for a two-week run (November 3rd to November 14th) at The York Theatre as well as a dance presentation for a weekend at The Historic Theatre at The Cultch. The two productions are Nirbhaya and Sunya.

Nirbhaya is a story based on real life experiences and the violent incident that shocked Delhi and the world. On December 16, 2012, a young woman boarded a bus in Delhi heading for home. What followed changed countless lives forever. Internationally acclaimed playwright and director, Yaël Farber (Mies Julie) has created a searing new work that cracks open the code of silence around women whose lives have been shattered by violence. For ages 16+. Contains adult themes and mature content.

I have a pair of tickets to give away to opening night of Nirbhaya (at the York Theatre) as well as Sunya (at The Cultch). Here’s how you can enter to win:

RT to enter to win tickets to a @DiwaliFest show from @Miss604 http://ow.ly/TVmDX

I will draw two winners (one for each show) at 12:00pm on Monday, November 2, 2015. Follow Diwali Fest Vancouver on Facebook and Twitter for the latest information about the festival.

Update The winner for Nirbhaya is Jennifer and Sunya is Jason!