The 34th annual Vancouver International Film Festival (“VIFF”) is happening September 24th to October 9th, and Miss604 is a proud media sponsor for the 6th year. This means that on top of providing festival information and sharing the latest news about some of the 355 films presented this year, I also get to sponsor a specific film presentation, which includes a ticket giveaway. This year, I selected Mavis! as my partner film, and it looks, and sounds, fantastic!

Film First, an independent film production and media company based in Brooklyn, New York is thrilled to present their new documentary, directed by Jessica Edwards.

Mavis! is the first feature-length documentary on gospel/soul music legend and civil rights icon Mavis Staples and her family group, the Staple Singers. From the delta-inflected gospel sound she helped pioneer in the 1950s, to the “message songs” of the civil rights era marching beside Dr. Martin Luther King Jr., to massive hits such as “I’ll Take You There” in  the soul-filled Stax era, and her recent Grammy-winning work with Wilco’s Jeff Tweedy, Mavis Staples is one of the most influential and enduring vocalists of our time and a true American icon.

“A spirited and captivating doc that richly deserves the exclamation point in its title. Jessica Edwards has created a cinematic portrait quite capable of converting the uninitiated into acolytes, and elevating casual interest to flood-tide levels of respect and affection.”
– Variety

Through a 60-year career crossing music genres and societal shifts, Mavis has managed to transform herself as she goes, yet never alter. She occupies a singular place in American music: a soldier of love and peace whose fight continues. At 75, she’s making the most vital music of her career, and her message of equality is needed now more than ever. 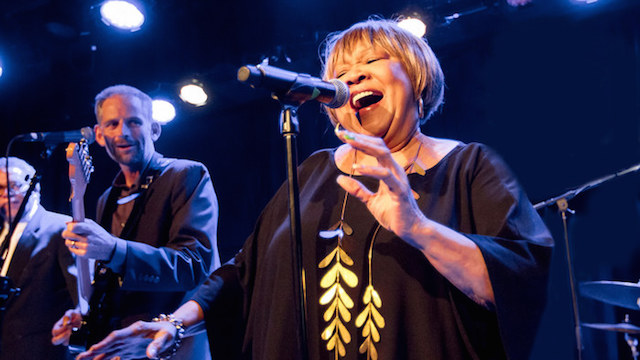 Win Tickets to Mavis at VIFF

I have 2 pairs of tickets to give away to the September 25th screening of Mavis! at the Rio Theatre. Here’s how you can enter to win:

RT to enter to win tickets to see @filmfirstco’s MAVIS! at @VIFFest from @Miss604 http://ow.ly/SfEzF

I will draw two winners on Monday, September 21st at 12:00pm. Follow Mavis! the Film on Facebook and Twitter for more information about screenings and appearances.

Stay connected with VIFF for updates and announcements by following @VIFFest on Twitter and pick up your program guide at locations across the Lower Mainland for more information.

Update The winners are Erica, Laura, and Dee!

Also on Miss604.com
« Renfrew Ravine Moon Festival
Things to do in Bellingham »