This post has been contributed by Sam Cousins, Stewardship Coordinator with Stanley Park Ecology Society (“SPES”). I have been following SPES since I moved into the West End a decade ago and I have been a member for three years. I wanted to offer the team an opportunity to share their news, events, and work so I have created “SPES Saturday” where they contribute and share stories with my audience once a month.

Art and science are taking conservation to a new level in Stanley Park. With the help of environmental artist Sharon Kallis, the Stanley Park Ecology Society’s (“SPES”) volunteer Eco Stewards are restoring a damaged bank along North Creek in Stanley Park. 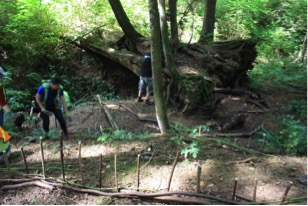 North Creek is an ephemeral stream that flows into Beaver Lake. It supports a number of species of insects and amphibians that are threatened by the erosion of tread material (gravel, wood-chips and soil) from the adjacent North Creek trail.

To stabilize the creek banks and prevent erosion and sedimentation in the stream, Sharon Kallis is reusing Himalayan blackberry stems as fencing material, English ivy vines woven into bio-netting for bank stabilisation, and yellow flag iris leaves as mulch for planting. Normally, these invasive plants would be removed and discarded as waste. Sharon has other plans for them. 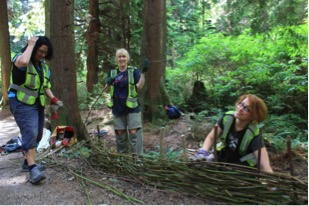 The team has just completed making the fences using the old traditional method of wattling. These fences are intended to block off and decommission trails and discourage people from walking down to the creek – one of the primary causes of the erosion.

The fences will also help protect the planting that is happening this fall. The planting and the addition of woody debris will help to stabilise the area and enhance the natural habitat for the species that call North Creek their home.

The final phase of the North Creek project will be happening in October with the installation of “bio-netting” woven from invasive English ivy.

This project would not have been possible without significant volunteer support. A big thank you goes out to SPES’ intrepid volunteers for braving the dirt, scratches and weather to make this project a continuing success.

The work at North Creek is part of the larger Creative Upcycling in Stanley Park project. Funding for this project is provided by: