It was like a scene from an action movie or survivalist reality show. The clouds had rolled in and the first hesitant raindrops began to fall. I had to put away my camera and my phone, which I had used to document our 6km hike along unnamed ridges, peaks, and grassy alpine slopes, at 7,000ft elevation. 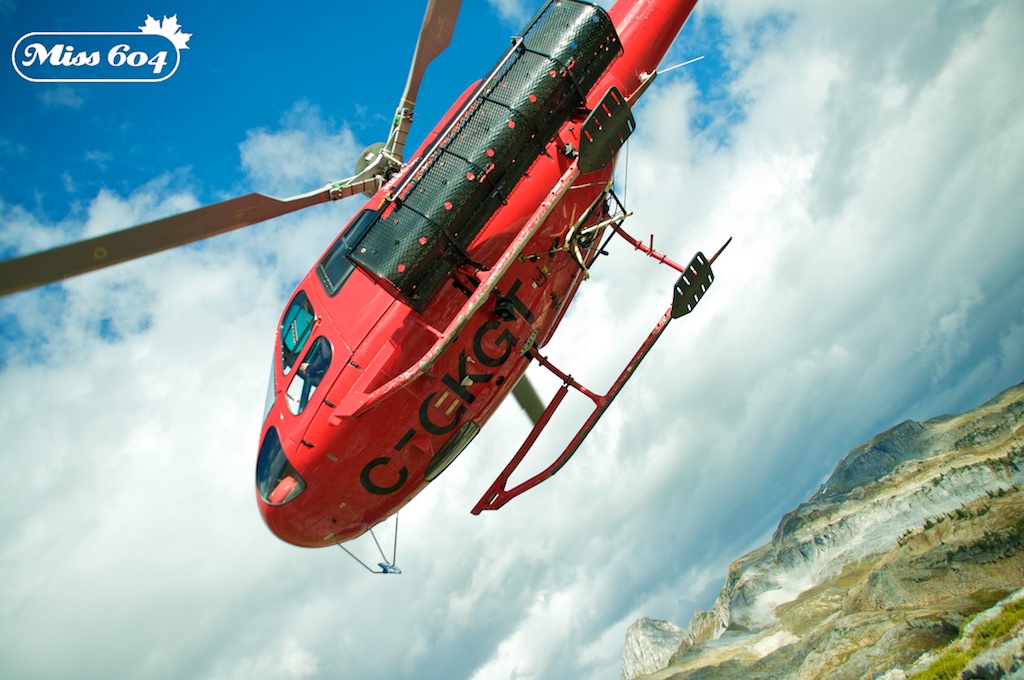 Our guide, Jeff Honig with Selkirk-Tangiers, radioed for the helicopter to come and pick us up as our group of eight descended from the rocky terrain down to a creekside clearing on the edge of two turquoise lakes. We had to stay ahead of the weather.

The rain now fell in full force and the pitter-patter of its drops on my coat echoed the beat of the helicopter rotor blades. Jeff found the first flat portion of land we had seen all day, crouched on one knee, and stretched his arms out straight in front of him, as though he was about to welcome the helicopter with a big hug.

The landing skids touched down next to Jeff and four of us grabbed our soaked gear, ducked like characters on M.A.S.H., and ran into the cabin. Our pilot, Jacques Auger, would drop us off and return for the rest before the black clouds completely overtook the mountains.

So how did it come to pass that I would be a part of an alpine helicopter evacuation? I was on an adventure tour in the Kootenay Rockies region and it was all a part of our day of heli-hiking. Selkirk-Tangiers is an established heli-skiing company based in Revelstoke, BC and during the summer months they run heli-hiking tours. 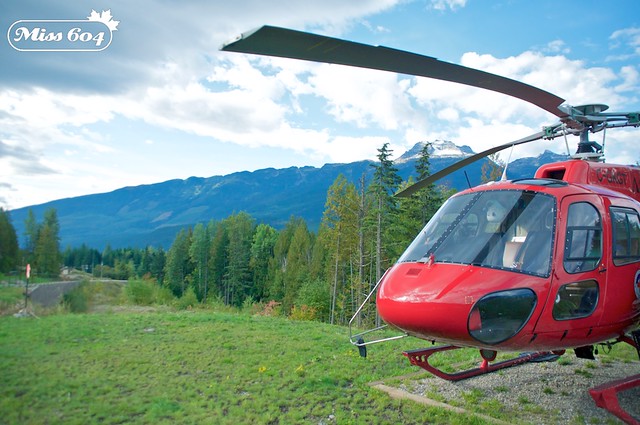 After meeting in the Revelstoke Mountain Resort Retail Store in the village, you can get picked up by helicopter at the base of Revelstoke Mountain Resort and dropped off high on a peak somewhere between Mount McDonnell and Mount Cartier in the Purcell Mountain range backcountry. Selkirk-Tangiers offers heli-sightseeing tours, heli-biking, heli-picnics, and heli-hiking (and we had a picnic lunch during our hike as well). 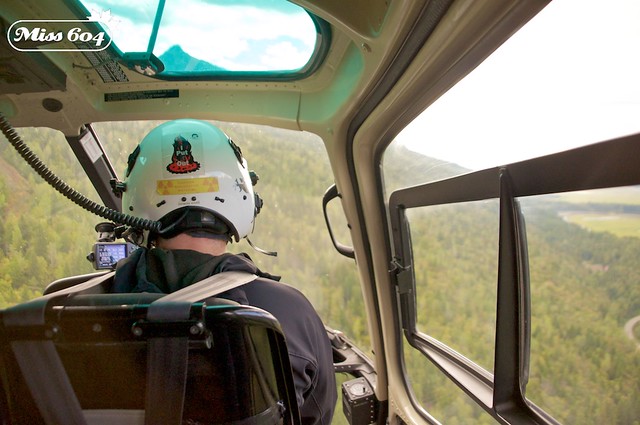 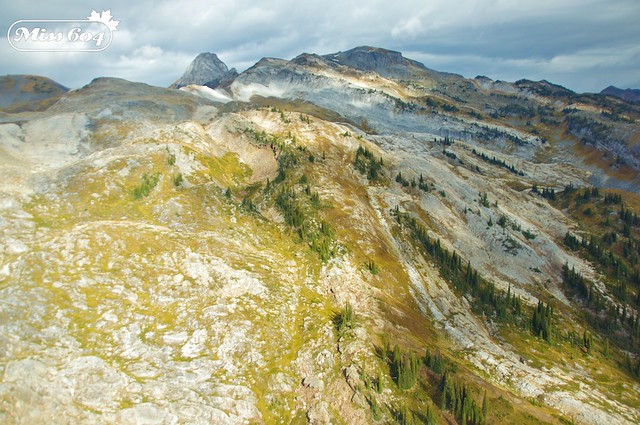 From our drop-off point, we set out along rocky ridges –I highly recommend hiking poles and definitely make sure you have adequate hiking footwear. There was no path, only the guidance of Jeff who is Selkirk-Tangiers’ Lead Guide and Operations Manager. He lead us on an interpretive hike, up and over blocks of stone and beds of heather. The mountain terrain was unlike any other I had encountered, and I have hiked our Coastal Mountains and at Whistler Blackcomb before. 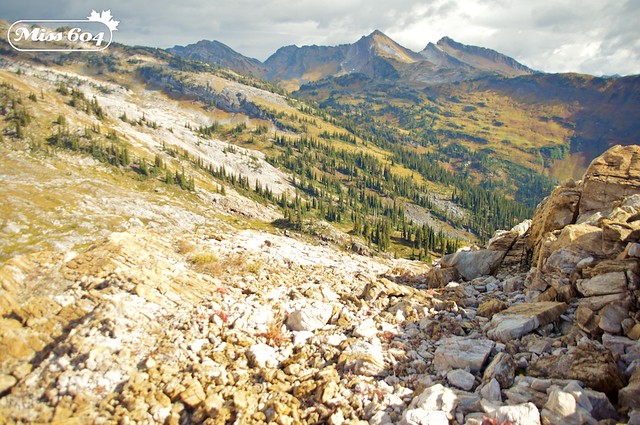 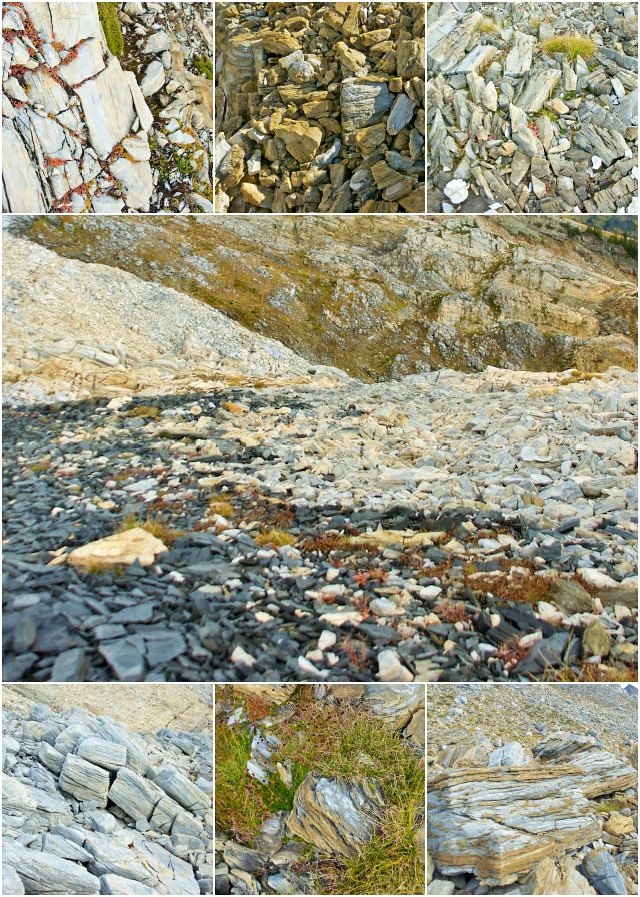 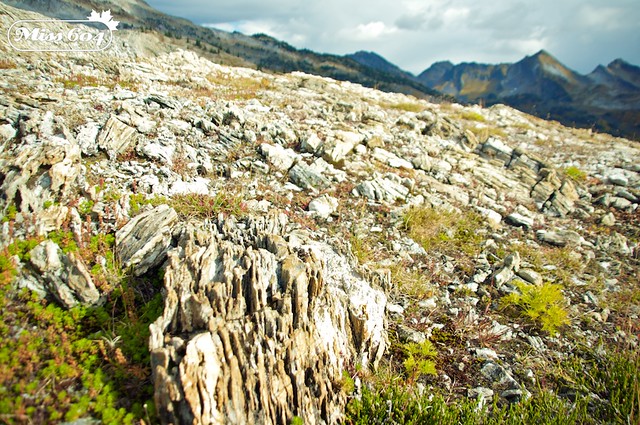 The rocks were otherworldly. Some looked volcanic, others looked like lumber, and others were slick and sharp (and managed to cut my finger open with the slightest touch later on in the hike). It felt like we were on the surface of the moon at times, and others it felt like we had the entire mountain range to ourselves as autumn colours crept in and painted the flora that added a softness to the otherwise harsh topography. 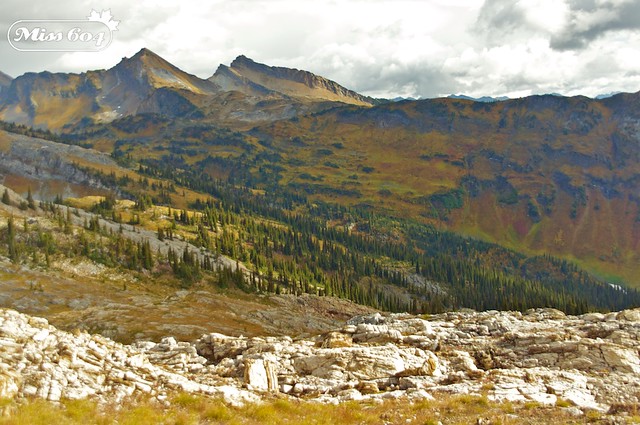 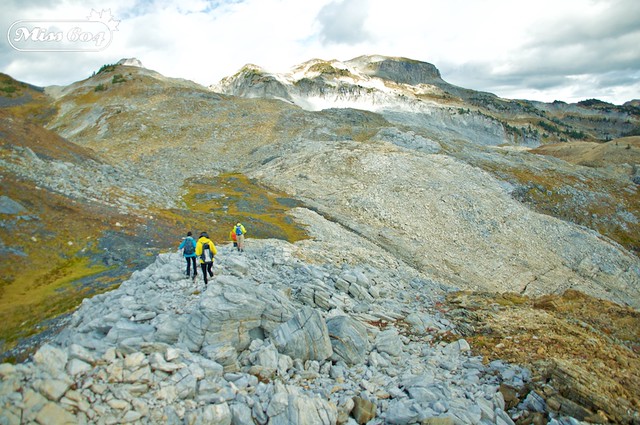 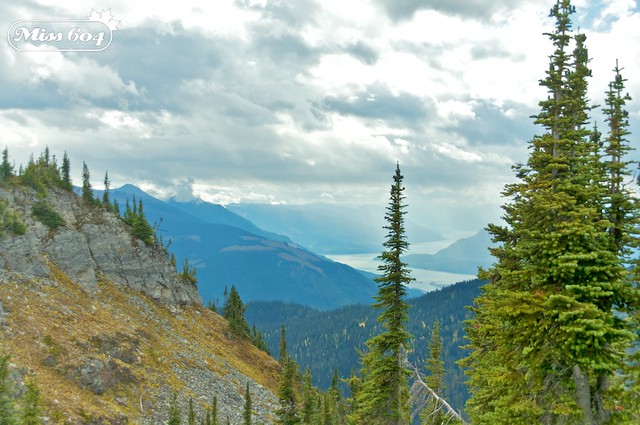 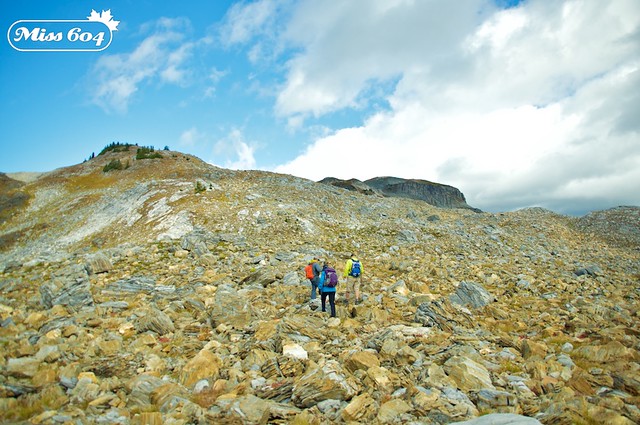 I pushed myself to keep up with the pack, but Jeff was very good at taking breaks when needed so that we could either catch our breath (I’m a sea-level girl after all), take photos and selfies, gulp down some water, or enjoy our picnic lunches that came with hearty sandwiches and delicious cookies.

I had a lot of trust in Jeff, and he was an encouraging guide — who even used the word “skookum” naturally in a sentence, which made him even more cool in my books. I think it makes a world of difference to have a good group of people, and a great guide with you, when you’re so out of your element. 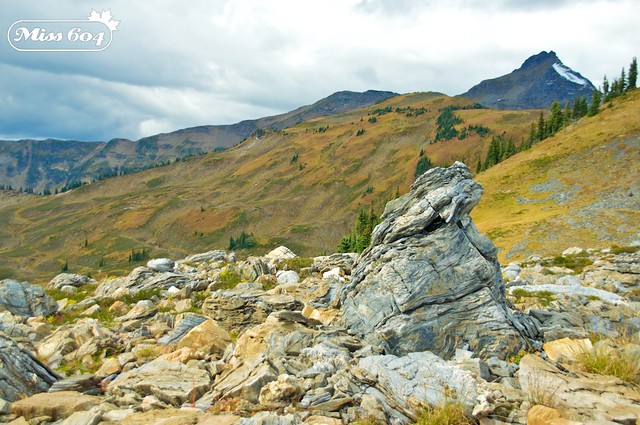 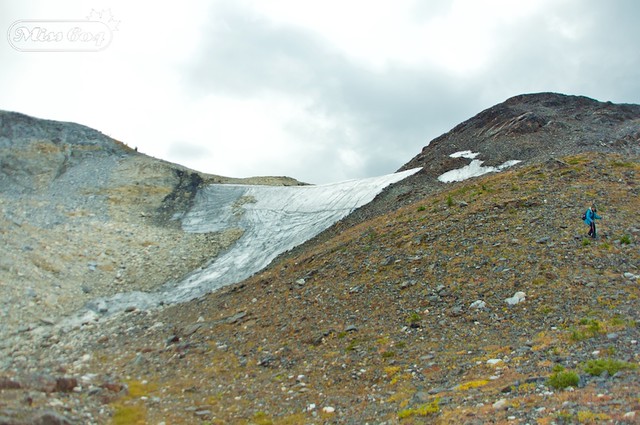 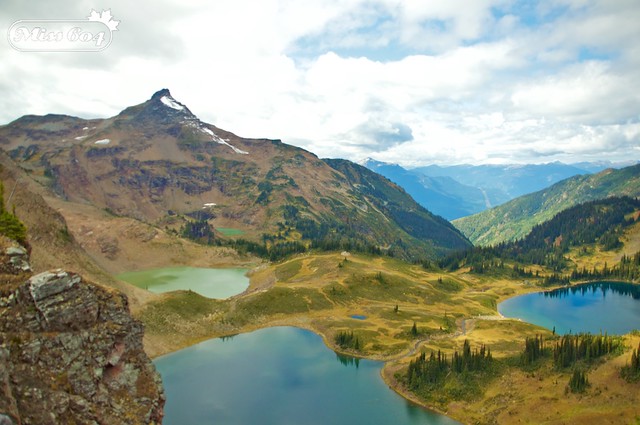 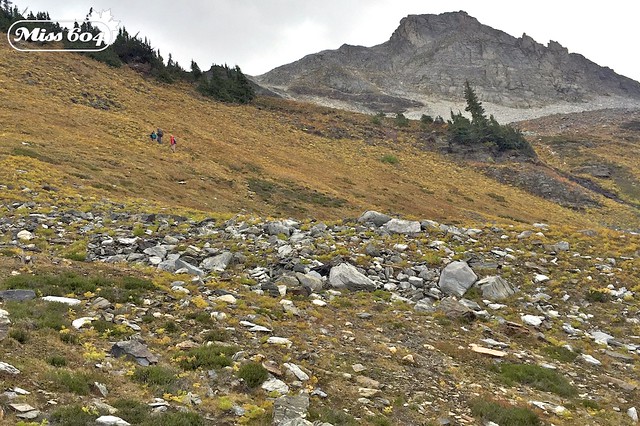 We summited a peak, we crossed a glacier, we descended muddy slopes, we had very strong feelings of accomplishment. I can’t even recall how long we were out, perhaps it was 4 hours, we just had to get to our exit point before the rain came. We made it, just in time, and the sense of wonder, joy, and rushing adrenaline still fills me today as I go through my photos. It was a thrilling adventure but I wasn’t afraid, I was – and am – empowered. 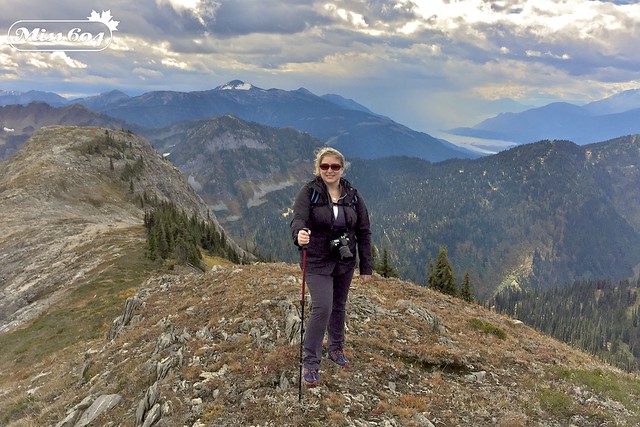 Learn more about Selkirk-Tangiers by following them on Facebook, Twitter, and Instgram. I highly recommend you check out their summer or winter tour offerings when you plan your trip to Revelstoke and the Kootenay Rockies. More resources are available through Destination BC.

Share27
Tweet28
Share
Pin1
Email
Reddit
WhatsApp
56 Shares
Current Contests on Miss604
*All contests are open to residents of Canada only, unless otherwise stated. Contest timelines are published on each individual post along with entry methods. Some contests may only be open to those 19 years of age and older. Winners are announced on the contest blog posts. Contest policy »
Comments are closed on this post
Advertisement

Also on Miss604.com
« BC Craft Beer Month
Things to do in Vancouver This Weekend »