Free lunchtime concerts have returned to the CBC Plaza on Hamilton Street, between Georgia and Robson, in Downtown Vancouver. CBC Musical Nooners take place every weekday from 12:00pm to 1:00pm through to August 21st, offering up free entertainment for your lunch break. 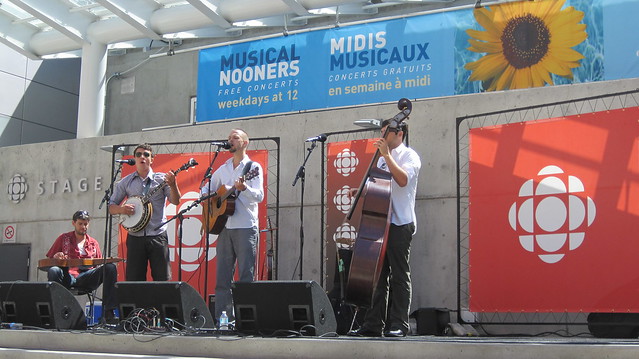 Thursday, July 23, 2015: Black Umfolosi (a co-presentation with the Mission Folk Festival)
Traditional a cappella vocal group from Zimbabwe who have thrilled audiences around the world for over 30 years.

Friday, July 24, 2015: Volosi (a co-presentation with the Mission Folk Festival)
From Poland, with love, this 5-piece string ensemble blends the sophistication of classical performance with the visceral power of traditional music from the Carpathian Mountains.

Monday, July 27, 2015: Shred Kelly
CBC Music listed Shred Kelly’s release, “Sing To The Night” as one of the most anticipated Albums of 2015. Come see this “stoke-folk” quintet from Fernie, BC.

Wednesday, July 29, 2015: Robyn & Ryleigh
Sisters from Langley whose music is the sound of country today.

Friday, July 31, 2015: Tanga
Tanga’s take on the sound of Cuba will make your feet move, your hips sway and paste a big smile on your face.

The schedule for August is yet to be released but it will appear at this CBC link. Follow @CBCVancouver on Twitter for more information.