We look out across the inlet at glowing sunsets every night and somehow see past the 12-18 ships and tankers that dot the landscape between us and the horizon. Now the unfortunate morning has come that “Oil Spill in English Bay” and #VanFuelSpill are the news topics of the day.

The City of Vancouver has issued an alert as there was a heavy bunker fuel spill in Burrard Inlet this morning. The City warns that the wind may push the fuel to shore and the Coast Guard is currently managing the incident. Bunker fuel is toxic and should not be touched, it is a type of fuel oil.

CBC Vancouver is reporting that a grain ship is the possible source of the fuel leak and that the coast guard’s environmental response team was dispatched to the spill yesterday.

“There was a fair amount of product — what appears to be fuel, oil for the ships, around a particular grain carrier,” Parker-Jervis said. As a precaution a boom has been constructed around the ship in an attempt to contain the fuel, though the ship isn’t yet confirmed as the source, he said.

Five vessels currently surround the ship. The ship was in the process of loading grain. There is no evidence of fuel spilled between the grain terminal and where the ship is currently anchored, Parker-Jervis said.

At this time there is no estimate on the amount of fuel that has been spilled.

Thanks for all help offered: but right now don't go to beaches to clean up as there are health risks. Trained staff are onsite #VanFuelSpill

If you see fuel on or near a beach, contact the Coast Guard at 1-800-889-8852. At this time, do not go to the beaches to offer to help clean up the spill as it is a health risk. As of 10:12am, the City is reporting that biologists and wildlife experts are currently assisting in assessing impacts of the spill on shoreline and wildlife.

Update at 10:45am with Geoff Meggs with the City of Vancouver: “No matter how much care is taken by industry, accidents can happen […] today our focus is to make sure that this one is as small as possible.”

City Manager Penny Ballem says despite responding with city resources like Vancouver PD, Port of Metro Vancouver, and Vancouver Fire, Ballem says we’re going to need the help of the federal government to deal with this. “We have a very clear role, we have no responsibility and resources for cleanup but that is their jurisdiction.” Federal agencies contacted the City of Vancouver this morning at 6:00am to tell them they had been working on the spill.

Commissioner John Coupar of the Park Board says there is currently no evidence of the spill reaching Spanish Banks or Kitsilano beaches. More information will be available as the day goes on and the spill is assessed.

1:20pm: The City of Vancouver is getting reports of people touching the oil. They remind everyone again to NOT touch the oil as it is toxic. If you do touch it, wash your hands immediately with clean water and soap. Please also keep your pets away from the water and shoreline just to be safe. Park rangers are posted at all city beaches to help people avoid oil-affected water and wet sand.

If you want to help clean up call 3-1-1 to register your interest, and the City will call you if they have volunteer opportunities available. 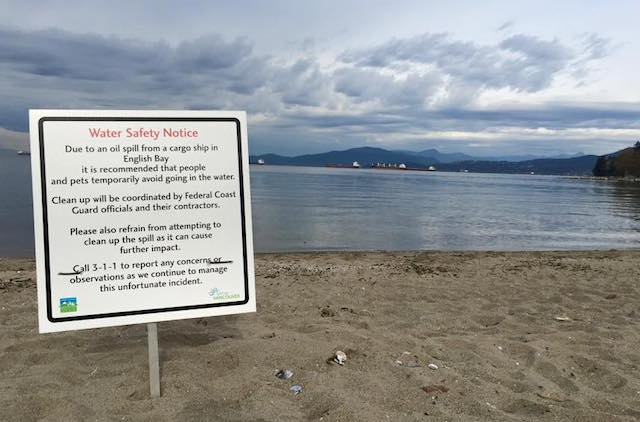 3:45pm: In an afternoon press conference the officials estimate about 2,800 litres of oil escaped into English Bay and 1,400 litres have been recovered. 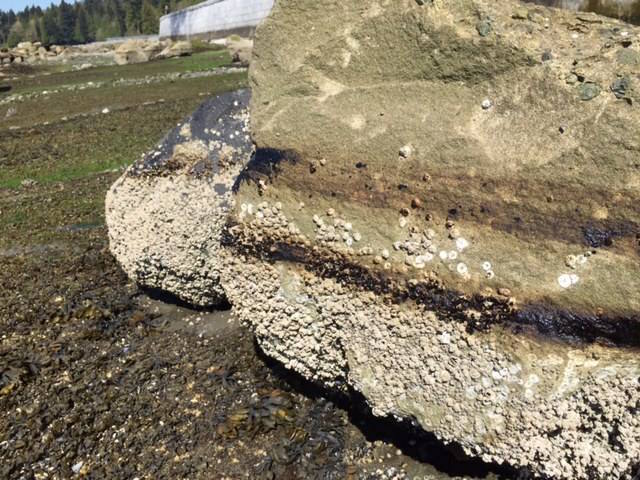 Photo of the tideline oil near the Seawall posted by Stanley Park Ecology Society on Facebook.

Friday, April 10, 2015:
It has been confirmed that the bulk carrier ship that was the source of an estimated 2,700 litre bunker fuel spill into Vancouver’s English Bay was on its maiden voyage. The MV Marathassa was constructed in Japan and was in Vancouver to collect grain when it began to leak on Wednesday.

There is another press conference this morning, at which the Mayor of Vancouver is speaking. He has said that response to what is a relatively small oil spill is woefully inadequate, and adds that city wasn’t notified for 13 hours.

Mayor: "Our real concern is if this had been a lot worse … this kind of response could have been a catastrophe." #VanFuelSpill

There are many questions that must be put to Ottawa and Victoria, and he’s asked City Manager to give a full briefing at council meeting next week. You can read the Mayor’s full, official statement online here.

Want to help? Register with us online: http://t.co/SMgMP1Fmk8. Don't just go to beaches to clean up as there are health risks. #VanFuelSpill

The BC SPCA warns that you should never attempt to wash a wild animal affected by oil or pollution on your own. Due to the painstaking, stressful, and slow rehabilitation process, you should contact a professional wildlife rehabilitator. If you spot wildlife in distress, the City of Vancouver asks you to call 604-873-7000 with the location, species (if known), condition, and behaviour of the animal.

Update 2:00pm on Friday, April 10, 2015:
From the City of Vancouver: “The Western Canada Marine Response Corporation (WCMRC) as directed by the Canadian Coast Guard will be coordinating the shoreline cleanup and our staff will assist as required. The federal agencies have advised us that cleanup efforts will involve crews in protective gear with special expertise in oil recovery and for now there is no involvement needed for possible volunteers.”

Crews are out along the seawall this morning, helping clean up after this week's oil spill. pic.twitter.com/TOVtzeMTTV