Fan Expo Vancouver is coming up this weekend as Sci-Fi celebrities, comic book artists, gamers, and cosplayers get together with fans for one mega pop culture convention in Downtown Vancouver. I had the opportunity to interview talented local comic book and storyboard artist Steve Skroce, who’s done work with Marvel and DC Comics, along with the Matrix Trilogy, V for Vendetta, Cloud Atlas, Jupiter Ascending and more.

“I haven’t been to a convention like this in probably a decade,” Steve told me over the phone earlier this week. “I transitioned out of comics and I got into movies doing storyboards and concept art for films. That kind of took up most of my time — not most, a lot of it — for 10 years. It was always on my list to get back into it.”

Steve got his first job in the industry when he was just out of high school and he says the momentum just built from there.

“I’ve been a long time nerd and ever since I was a little kid, all I wanted to do was draw comics.” He said he used to send Xeroxed copies of his work to Marvel and DC Comics, along with any other publisher who would accept them, for years until there was an opening in the industry.

Steve ended up at Marvel for 10 years where he did work on Spiderman, Wolverine, and other X-Men until he transitioned to movies thanks to what he says it just pure dumb luck. The first comic book he was hired to do for Marvel was in 1993 on the Clive Barker series Ectokid. He explained that editors will pair artists up with writers and he just happened to get paired up with the Wachowskis, who eventually went on to become the creators of The Matrix.

“[The Wachowskis] asked me if I wanted to do storyboards for this pitch — for this movie they were trying to get made called The Matrix — and I was like, ‘I don’t know I don’t want to leave the rock solid world of comic books for this flash in the pan movie business thing’… and then The Matrix became what it was and I would up working on the sequels, which led to other opportunities.”

I asked Steve about the transition from comic books to storyboarding live action movies and he said it is a very different process. 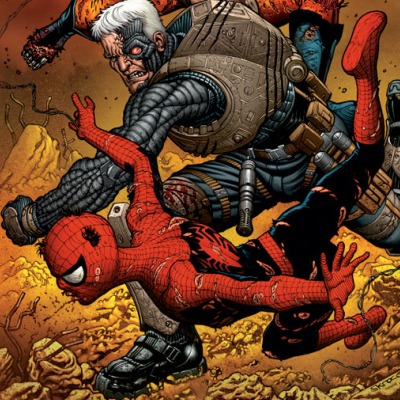 “You don’t have as much real estate to work with with a comic book. With a movie, you’re doing drawings that will supposedly play out in real time, with real actors or visual effects, so you can have sequences that run hundreds of pages long, hundreds of drawings long. With a comic book, which is generally around 20-25 pages long, basically the writer or artist is sort of figuring out the essential story beats for each page beforehand and figuring out exactly how much information needs to go on each page.”

He added that it’s about being a little bit more aware of how much room you have to work with, and how much drawing is necessary to tell the amount of story you want to tell.

Coming back to the comic book realm from film, he is excited about what that means for him and his lifestyle. “I got the opportunity to work on a movie and kind of let that take me away for a while. It was very exciting to travel and see the world, and do all of that stuff. Now that I’m older I just want to stay in one place and do something that I want rather than being a helping hand on something else — which is a great life experience — but it’s exciting to have the authorship and control of your own projects.”

Speaking of his own projects, he’s currently working on a comic book called We Stand On Guard alongside author Brian K. Vaughn (Lost, Under the Dome).

“[We Stand on Guard] takes place in Canada 100 years in the future. It follows a band of Canadian civilian freedom fighters who are battling this vastly superior force, the United States military, that have basically invaded us for our water and they are equipped with giant robots and futuristic drones and things like that. It’s kind of a Sci-Fi David and Goliath story about Canadians defending ourselves against Americans.” We Stand on Guard is set for release in July, 2015.

“There’s definitely a community here and that’s part of the reason why I’m going to Fan Expo, I want to get back into it and meet some people.”
~ Steve Skroce

On the Fan Expo website, Steve is listed under his recent work for DC Comics’ Suicide Squad and says that at conventions like these, he’ll get all kinds of fan engagement, from those looking to get their books signed to aspiring talent looking for feedback or tips on how to break into the industry. For the most part, he says it’s a friendly day of shooting the breeze.

For those aspiring artists who do visit Steve’s booth at Fan Expo, he’ll have some words of wisdom to share, which I believe are also great life lessons. “I would say listen, be open to criticism, and be polite, and just make sure you are good at relationships. You have got to keep your relationships going, be professional, make sure you’re not a pain to work with. Be on time!”

Steve will be at Fan Expo Vancouver on Saturday, April 4th only so be sure you stop by, bring your books for singing, and soak up some of his experienced wisdom.

Passes for single day, full weekend, and VIP experiences are available online now. Same day tickets can only be purchased at the box office.