Vancouver has officially established long-lasting and passionate love affair with craft beer, and the growth of the craft beer industry in BC has been astounding in the last few years. The market share for artisanal beer in British Columbia has doubled in the past four years, from 9 per cent of all beer sales in 2009 to 19 per cent in 2013. Today, there are over 80 craft breweries in BC and there were 10 craft brewery openings slated for 2014 alone. So how can you take in all of this delicious, local beer and sample some of the best brews being made today? With the Vancouver Craft Brewery Shuttle, of course! 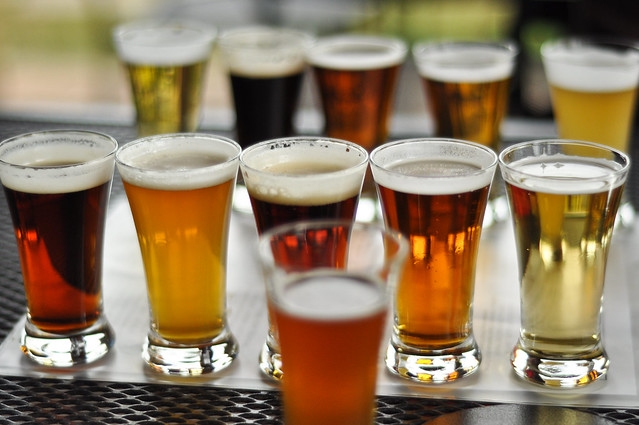 “I think people love craft beer because of the variety and taste,” says Ira Thomson, a tour operator for Wildside Vancouver, which runs the Vancouver Craft Beer Shuttle. “The atmosphere in a tasting lounge is awesome. Trying unique creations at different breweries and tasting rooms while beer is being brewed right in front of you.”

Wildside tarted doing their craft beer tours about 2 years ago, when there was only a fraction of the breweries there are now. Ira told me that since then the industry has grown — exploded to be precise — the demand for tours has definitely gone up. “It’s exciting as their are so many different options so each tour can be unique and the shuttle offers a way for people to see multiple locations in a single day.”

The Vancouver Craft Beer Shuttle operates as a connection between Main Street, Commercial Drive (East Vancouver area) and North Vancouver craft breweries. There are currently 7 breweries on the tour to ensure that the loop can be completed frequently enough and participants can “hop” from one to the next with ease. You can pay $5 per stop or ride all night for just $10 — it’s cheaper than a cab!

The Vancouver Craft Brewery Shuttle runs every Saturday from 3:00pm to 10:00pm, rain or shine, and it loops around every 90 minutes with more frequent runs during the evening. You’ll have enough time to enjoy a flight of craft beer tasters with your friends, then hop the shuttle to another brewery destination. En route, enjoy Brew Trivia and the chance to win prizes.

Share226
Tweet
Share
Pin4
Email
Reddit
WhatsApp
230 Shares
Current Contests on Miss604
*All contests are open to residents of Canada only, unless otherwise stated. Contest timelines are published on each individual post along with entry methods. Some contests may only be open to those 19 years of age and older. Winners are announced on the contest blog posts. Contest policy »

Also on Miss604.com
« BC Camping Reservations Open For 2015
Win a Staycation at Element Vancouver Metrotown »