The fourth Macaron Day in Vancouver is coming up on March 20th, joining bakeries, cafes and bistros around the world to support local causes, one sweet treat at a time. 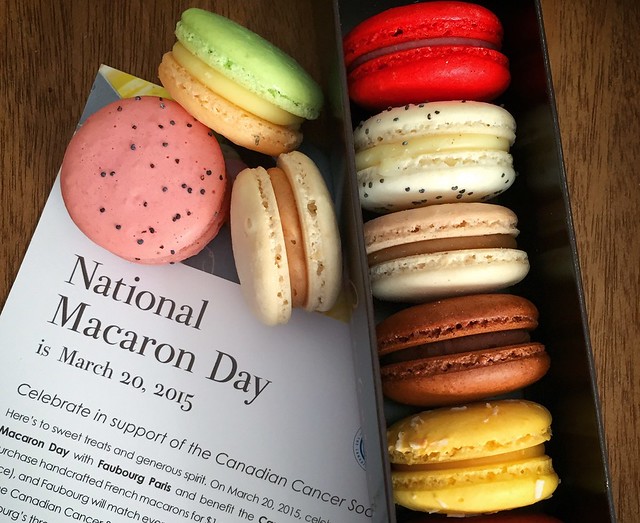 Macarons (not to be confused with macaroons) are meringue-based confections commonly filled with buttercream or jam with a delicate soft and crunchy outer shell. All you need to do is visit a participating “Macaron Day” bakery or cafe on March 20th and you’ll be given a macaron and be invited to make a donation their chosen charity.

Faubourg‘s three locations will all be participating: Kerrisdale (2156 West 41st Avenue), Downtown Vancouver (769 Hornby Street) and West Vancouver (792 Main Street, Park Royal South). They will all offer signature Parisian-style macarons for $1 each (half off the regular price), match every dollar of macaron sales, and donate 100% of gross proceeds to the Canadian Cancer Society.

French Made Baking at 81 Kingsway (at Broadway) in Vancouver is participating again this year, supporting the BC Children’s Hospital. Everyone who mentions Macaron Day in the store will receive a macaron and will be invited to make a donation (while supplies last, suggested donation is $2). Part of all macarons sales will be donated to the Foundation as well. French Made Baking will have about 15 different flavours available at the beginning of the day and they’ll be open from 8:00am to 6:00pm.

Soirette, located at 1433 W Pender Street in Vancouver, is also participating again this year in support of Make a Wish in BC.

Update: L’Epicerie Gourmande at the Granville Island Public Market (1689 Johnston Street) will also participate. On Macaron Day, L’Epicerie Gourmande will donate 30 percent of regular macaron sales to BC Children’s Hospital. The scrumptious two-bite morsels are priced at $2 each and are available individually or in boxes by the dozen for gifting.

Share330
Tweet
Share1
Pin1
Email
Reddit
WhatsApp
332 Shares
Current Contests on Miss604
*All contests are open to residents of Canada only, unless otherwise stated. Contest timelines are published on each individual post along with entry methods. Some contests may only be open to those 19 years of age and older. Winners are announced on the contest blog posts. Contest policy »
Comments are closed on this post
Advertisement