I don’t often cover breaking news in Vancouver but a chemical fire currently burning at Port Metro Vancouver is widely effecting the city today. Here’s the official statement from the port: 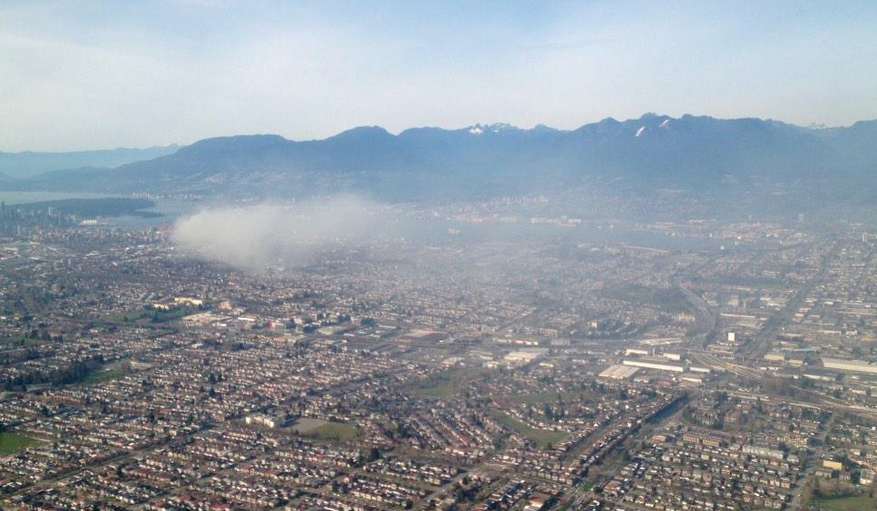 Photo by Chad Dey in the News1130 Air Patrol

Statement on the fire at Centerm Container Terminal
At approximately 1:40 p.m. we received confirmed reports that a container is on fire at the Centerm container terminal on the south shore of Burrard Inlet. Vancouver Coastal Health has confirmed the material inside is a hazardous organic compound (trichloroisocyanuric acid), and is a possible eye and skin irritant.

Our primary concern is the safety of first responders, the public and all port workers. The Centerm container terminal and nearby port properties have been evacuated. All port operations along the south shore of Burrard Inlet have been shut down, including rail and truck access. Vancouver Fire and Vancouver Coastal Health are on-site and actively determining if any additional evacuations are required. We will continue to monitor the situation and provide further information as it becomes available.

Port Metro Vancouver has evacuated the 700-block of Centennial Road as well as the Clark Dr. overpass and said it was shutting down all operations on the South shore. CPR Rail was also asked to shut down a rail line while crews dealt with the blaze. [Source: CTV]

As of about 3:30pm, the fire had been upgraded to a four-alarm blaze and the call has been put out for 21 firefighters to staff multiple alarm fire trucks. At least eight fire trucks and more than 24 firefighters have already responded. Dr. Patricia Daly from Vancouver Coastal Health says they are not evacuating the public at this moment. “If they can remain in place at the moment, doors and windows closed, that’s the best advice,” she says. [Source: Global]

“It is an irritant. It is a respiratory irritant, if you breathe it in. It also can irritate your eyes. We believe the risks are just short-term, but it’s still not advisable that anyone breathe this in or get it in your eyes,” explains Gavin Wilson with Vancouver Coastal Health.

Vancouver Police are encouraging anyone in the area east of Main, north of 1st and west of Nanaimo to go indoors, close all windows. People in north and east Vancouver are told to leave a note on your door if you have self-evacuated your home. [Source: News1130]

Smoke continues @PortMetroVan. The air is much worst east of the fire because of the wind. West is good where I am. pic.twitter.com/x3J3IjpqGx

Two @vanfirerescue chiefs say smoke is dangerous at source, an irritant further away. Asking residents to stay in. We’re ok, about 1km out.

Historically, this has been a dangerous week for the port. Friday is the 70th anniversary of the Greenhill Park Explosion, “The most spectacular and disastrous event in the port’s history,” according historian Chuck Davis in his book, History of Metropolitan Vancouver.