The Chutzpah! Festival, which began on February 19th, is going strong through to March 15th at the Norman Rothstein Theatre and various off-site venues around Vancouver. Now in its 15th year, it brings to the stage awe-inspiring dance, insightful theatre, hilarious comedy, and engaging music from international and Canadian artists.

The wide range of performances entertains audiences with everything from an Ethiopian-fused Reggae band and the Borealis String Quartet to stand up comedy from three hilarious South Asian, Italian and Vietnamese American-Jewish comedians Samson Koletkar, Mike Capozzola and Joseph Nguyen.

If you’re not attending any Chutzpah Festival performances, you’re definitely missing out so the aptly named “What You’re Missing” should be at the top of your list of shows to check out before the end of the festival. Chutzpah! will host the Canadian premiere of this play from March 10th to March 15th, 2015. 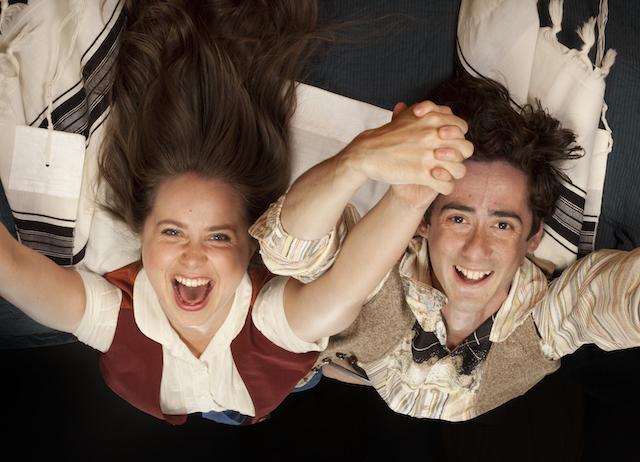 What You’re Missing is a bright new comedy about yearning and stifling, freedom and control, assets and liabilities, culture and class, and of course, strong dominating mothers. Vancouver-born, UK-based playwright Tamara Micner paints with a smile as she colours the streams of implications for two young people in love, living in the shadows of two very different histories – the Eastern European and Chilean Jewish experience.

The effervescent, talented Tamara Micner has us laughing deeply as we celebrate the universal in fumbling our way through difference. It’s 1974 in Vancouver. Isabel and Ed really like each other – and really like each other’s parents (a lot) more than their own! They want to travel together, but Ed’s mother refuses. Isabel’s dad won’t speak to Ed, Isabel’s mum won’t shut up about Pinochet, and everyone’s too hungry or too full. As the two families meet, eat, misinterpret and overreact, will the older generation be a catalyst, or a catastrophe? Is it only the young couple who are coming of age?

What You’re Missing premiered at the ADC Theatre, Cambridge in 2011 and has previously sold out at London’s King’s Head Theatre in 2014.

Gracing the stage in Vancouver will be six of Western Canada’s finest actors: Stephen Aberle, Natascha Girgis, Luisa Jojic, Amitai Marmorstein, Caitlin McCarthy and Jeffrey Renn. Directed by the award-winning director John Cooper, who has directed over 130 productions across Canada.

If you would like to see What You’re Missing at the Chutzpah! Festival, I have a pair of tickets to give away for the opening on March 10th. Here’s how you can enter to win:

Follow the Chutzpah! Festival on Facebook and Twitter for more information. I will draw one winner at random from all entries at 12:00pm on Thursday, March 5, 2015.

Update The winner is Bonnie!

Share55
Tweet
Share
Pin
Email
Reddit
WhatsApp
55 Shares
Current Contests on Miss604
*All contests are open to residents of Canada only, unless otherwise stated. Contest timelines are published on each individual post along with entry methods. Some contests may only be open to those 19 years of age and older. Winners are announced on the contest blog posts. Contest policy »