The 87th Academy Awards ceremony will take place this Sunday and Cineworks in Vancouver is inviting you to their Oscar Party hosted by Paul Anthony. 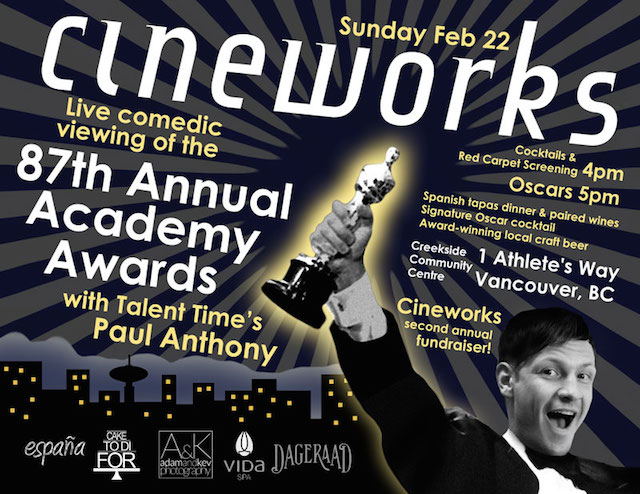 Cineworks is an independent filmmakers society and an artist-run production and exhibition centre that supports independent filmmakers and media artists. Through initiatives that foster dialogue and experimentation with cinematic practices, Cineworks engages their membership and the broader community through the transformative power of the moving image and the changing role of film in its contemporary context.

The event will be hosted by Paul Anthony who is the Host, Creator and Executive Producer of TV’s critically acclaimed Talent Time airing on both Shaw TV and the Novus Network. Paul was the inaugural recipient of the BC Entertainment Hall of Fame Award for the most promising newcomer and as an actor, he has performed in over fifty film and television projects including Blade Trinity and the Emmy Award winning Traffic.

Tickets for the Cineworks Oscar Party are available online for $85 and I also have a pair to give away. Here’s how you can enter to win:

Update The winner is Elizabeth!