This weekend, for the first time in the company’s history, Ballet BC presents Miami City Ballet, and their interpretation of some of George Balanchine’s most famous works: Serenade, Symphony in Three Movements, and Ballo della Regina. 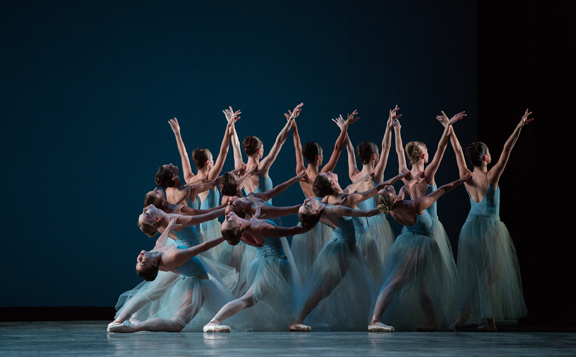 George Balanchine, founder of New York City Ballet, was a pioneer in ballet who heightened, quickened, and streamlined classical ballet while setting it to classical music. The first work, set to music from the original production of Verdi’s Don Carlos, Ballo della Regina, was like an opera in dance form. With various soloists, including a virtuoso performances by Nathalia Arja and Renato Penteado, the dancer sang with full force by every leap and twirl.

Symphony in Three Movements had a post World War II feel to it. With the female dancers lined up in pastel costumes that resembled 1950s swimwear, they moved in a formations that reminded me, at times, of old footage synchronized swimmers, arms up and diving in, one by one. The men’s costumes (white top, black tights, and white shoes) and the bright and athletic dancing choreography invoked a bit of West Side Story, and was great fun to watch.

Serenade, first performed by New York City Ballet in 1935, set to Tchaikovsky’s Serenade for Strings in C, was my favourite work of the evening. It is the first original ballet Balanchine created in America and is one of the signature works of New York City Ballet’s repertory. Balanchine worked unexpected rehearsal events into the choreography. If a one student fell, he incorporated it. If a student arrived late, and this, too, became part of the ballet.The moment the curtain came up and with all the female dances lined up with a blue light shining on and through their exquisite costumes–long, delicate tulles–the audience applauded. These tulles enhanced the intricate set of variations for the ballerina and the corps de ballet, which was in near-constant movement, flowing in and out of patterns with great speed and grace. Over 80 years old, this work was truly the most magical ballet I’ve seen to this date.

Also on Miss604.com
« Things to do in Vancouver This Weekend
Lion King Vancouver Pre-Sale »