Canada’s Royal Winnipeg Ballet’s Nutcracker, presented by Ballet BC, is a beautiful, big-hearted performance that retains aspects from the original’s German and Russian traditions, while being very relevant to a Vancouver audience by being set in Canada, at the turn of the 20th Century, just before WWI. 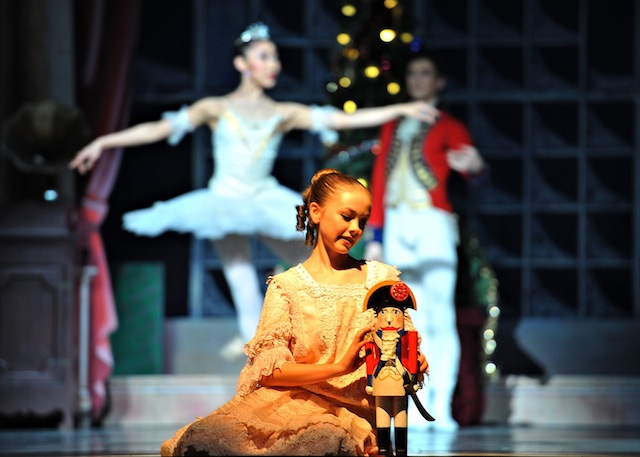 We all know the story: young Clara falls asleep after a party at her stately mansion and dreams of (or does she?) a fantastical world of live toy soldiers, dancing mice, and fairies. Though I’ve seen this ballet performanced multiple times, and know the story so well, there was something so fresh and invigorating about this performance.

First of all, Brian Perchaluk’s scenic design was so imaginative; there was so much dimension and texture to all the sets that it completely pulled the audience into the worlds he created. There were a few Canadian references in the set the design and direction that really refreshed up the classic: kids playing a hockey game in front of the house, a battle between the soldiers and mice on Parliament Hill.

Though this performance lacked some precision in technique (part of a ballet slipper fell off a dance and it didn’t always feel like the dancers were in unison with each other or the music), it gave so much in spirit and charm that these so called imperfections became my favourite part. For instance, a single snowflake seemed to fall from the sky when it shouldn’t have, but it added a magical element to performance, nevertheless.

Standout performance for me was the Nutcracker himself, Liang Xing, whose performance was exquisite as he leaped across the stage with such athleticism, grace, and perfection, he was exactly what you would expect from an doll idolized by an imaginative young girl.

Oh, and the kids! They were so cute! In their mice costumes (with bubble bums), or as baby white polar cubs, or as mounties and angels; it didn’t matter, every time a kid would come on stage, the audience would gush, and everyone just wanted to eat them up, all of them.

All of these elements–the cuteness of the kids, the imaginative set, the glorious Tchaikovsky music, the passion with each the dancers danced, and the Canadiana sprinkled throughout the performance–make this Nutcracker not just heart-warming, but almost emotional. I left full of feeling for home and family and magic and reality. The best things to feel about over the holidays.

Also on Miss604.com
« Kaboodles Toy Drive and Playmobil Giveaway
SPES Saturday: The Holly and The Ivy »