It’s always fun to ring in the New Year with the ones you love, and if your nearest and dearest are too young to head to the hottest club party or themed ballroom bash, here are a few family-friendly options for saying goodbye to 2014 and welcoming 2015 all together: 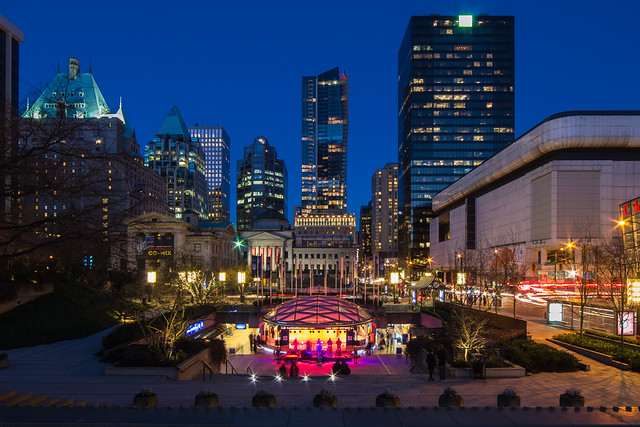 Where Robson Square Ice Rink, Lower Plaza (Robson between Hornby and Howe)
When December 31st from 4:00pm to 8:00pm with an early countdown at 7:30pm.
Cost Free
Details Ice skating, kid’s crafts (build your own noise maker), live music from Rumba Calzada, early countdown, then 8:30pm to 10:30pm The Freshest DJ’s spin for those who stick around to ice skate. The rink will be open until 11:00pm.

Where Grouse Mountain
When December 31st from 5:00pm to 9:00pm
Cost Tickets are required to take the SkyRide up to then enjoy the included activities up top. Access to New Year’s Eve festivities is included with your Annual Local’s Pass, Y2Play or Winter Season Pass.
Details Entertainment and fun for all ages, with ice skating outdoors, a live DJ, fire dancing performances, a scavenger hunt, and along with a special 9:00pm early countdown. Dick Clark’s New Year’s Eve broadcast with Ryan Seacrest will be playing in the Theatre in the Sky until 10:00pm.

Where Mount Seymour Family First Night
When December 31st from 6:00pm to 9:00pm
Cost $15 per person (children two and under are free), includes tobogganing. Add-ons: $10 Snowtubing, $20 Chocolate Fondue Tour.
Details Enjoy tubing and tobogganing, live entertainment on the main stage by children’s performers, a magic show, a fire spinning routine, a daring highline balancing act or venture into the woods with your family on an intriguing Snowquest.Cozy up to the warmth of Mt Seymour fire pits and indulge in fresh hot apple cider and s’mores. Fireworks finale is at 9:00pm. Mount Seymour will also run a shuttle bus service.

In case you missed the impressive holiday light display and Christmas train in Stanley Park, Bright Nights will be open on New Year’s Eve from 3:00pm to 10:00pm.

While there isn’t an early countdown or fireworks planned, the whole family can get together for a skate at the Winter Ice Palace in Cloverdale or the Snowflake Skate in Newton, both open 12:00pm to 4:00pm on December 31st.