Over the last three years I have volunteered on the phones during CKNW Orphans’ Fund Pledge Day where radio listeners call in to make donations that support thousands of kids in BC each year. This one day “radio-thon” broadcast will take place on Thursday, December 4th live from the Terminal City Club in Downtown Vancouver and since I cannot be there this year to answer phones this year, the CKNW Orphans’ Fund has given me all of the information I need so that I can spread the word about this wonderful cause:

The CKNW Orphans’ Fund is one of the largest sources of individual grant funding in the province of BC and help thousands of children annually. Their mandate is broad and grants include everything from speech therapy, to updated medical equipment, summer camps, tutoring, educational bursaries and more – all for some of the most vulnerable children in the province.

A child recently helped by the CKNW Orphans’ Fund is Samson, a 5 year old diagnosed with Fetal Alcohol Syndrome, Visual-Perceptual Learning Disability, ADHD and Oppositional Defiant Disorder. Despite being on an individual education plan, he is struggling at school and falling behind in all areas. He was referred to the Accomplished Learning Centre for its intensive FastForWord program.

Samson is one of two children living with his paternal grandparents, who are currently seeking full custody. Samson’s mother has had no contact with her children for the past 3 years and his father offers no support and has recently left the province. The CKNW Orphans’ Fund paid for Samson to participate in the FastForWord program. 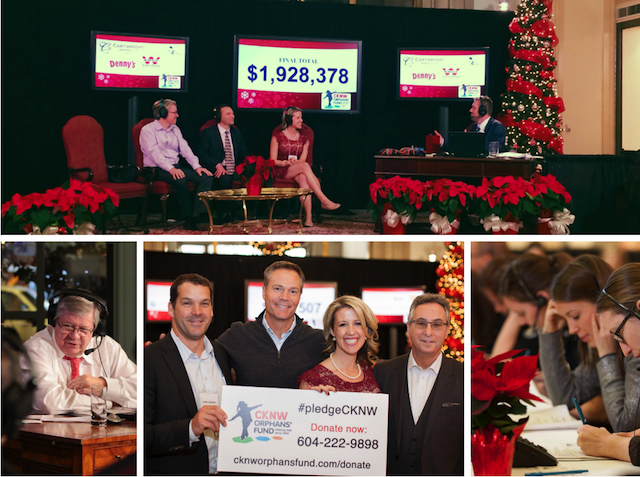 2013 Pledge Day photos by Mark Whitehead, Get the Shot Studios.

On December 4th, over 150 guests, including philanthropists, business leaders, media personalities and most importantly children who have been helped by the Fund will be interviewed on CKNW News Talk AM980 so be sure to tune in. Donations of $98 or more will be eligible to receive a free Michael Buble Christmas CD.

3 Ways to Get Involved

Last year, Pledge Day was able to raise $1.9 million for special needs children in BC! For more information, follow the CKNW Orphans’ Fund on Facebook and Twitter.