There aren’t too many shops that when upon entering, my eyes get wide, a big smile forms, and I look forward to browsing every shelf and stand for intriguing and exciting finds. At least, I didn’t expect the amount of awesome energy I would feel when I first stepped into the Toy Box on West Broadway last week, and discovered its playful and positive atmosphere which is all about being young at heart. 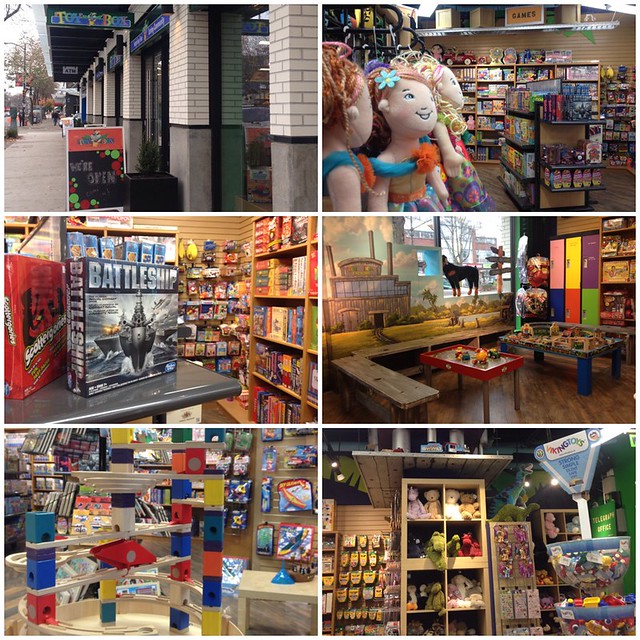 Toy Shopping at the Toy Box in Kitsilano

While the Toy Box by Toy Jungle has been a neighbourhood fixture for 42 years, owners Misti and Gary Mussatto moved the store into this location at 2933 West Broadway and had a grand re-opening celebration just this month. The pair, who were named “Toy Retailers of the Year” for Canadian independent toy stores in 2004 also own and operate The Toy Jungle locations at Morgan Crossing and at Park Royal.

Starting with a blank canvas, Gary transformed every inch of the West Broadway shop into a toy factory, with themed decor from floor to ceiling.

“The most special thing we offer is our team, the people who work here really care about kids and they care about the toys.”

I enjoyed my visit to the Toy Box so much because while the store had a playful factory theme, it allowed for much more than simply having a child enter the store, grab a toy, and take it to the cash register with mom or dad in tow. Every inch of the shop lends itself to an experience.

You can sit an play with trains, games, and puzzles. You can follow the Toy Jungle’s signature characters around the shop as they appear in various locations and, my favourite part, kids can ring the exclusive birthday bell when they come in on their birthday. The setting sparks your imagination.

Kids can also put on a hard hat and become “Toy Inspectors” for the day, actually assisting with market research that goes into the creation of the Tooky’s Picks recommended toy lists available at the counter.

At the grand re-opening of the store Gary said: “We like people that just want to play. We encourage people to play everyday. Just to come in and to see toys and games, things that might inspire them, and want to actually play. It’s a little escape from the every day.”

For an aunt like me, who isn’t on top of the latest brands and trends in the toy world, the best part of my Toy Box experience was discovering Tooky’s Picks which are toy suggestions based on age, gender, and type of child — from energetic and creative kids to the imaginative and nurturing. These lists, named after the store’s mascot character Tooky, helped me find the best toys for my nephews aged 6, 10, and 12 and thanks to toy specialist Neil’s recommendations, I believe found the perfect gifts for them.

Of course each area of the store is sorted by age group and you’ll spot popular brand names, like Playmobil and LEGO, along with some locally-designed toys like Cobble Hill puzzles.

Discover and experience the Toy Box and Toy Jungle for yourself by entering to win a $50 gift card that you can use at either the Toy Box in Kitsilano, Toy Jungle in Park Royal, or Toy Jungle at Morgan Crossing in Surrey. Here’s how you can enter to win:

Follow the Toy Jungle on Facebook and Twitter for more information, and plan a visit to one of the shops for the full experience. I will draw one winner at random from all entries at 12:00pm on Tuesday, December 2, 2014.

Also on Miss604.com
« Things to do in Vancouver This Weekend
STORYHIVE Web Series Competition »