Turning Point Ensemble is a dynamic group of some of Canada’s most exceptional musicians. Vancouver’s premiere chamber orchestra presents three innovative concerts for its 2014/20145 season that are in keeping with the core mandate and strengths of the Turning Point Ensemble presenting bold, distinctive music of the 20th composer/conductor Owen Underhill, Artistic Director. 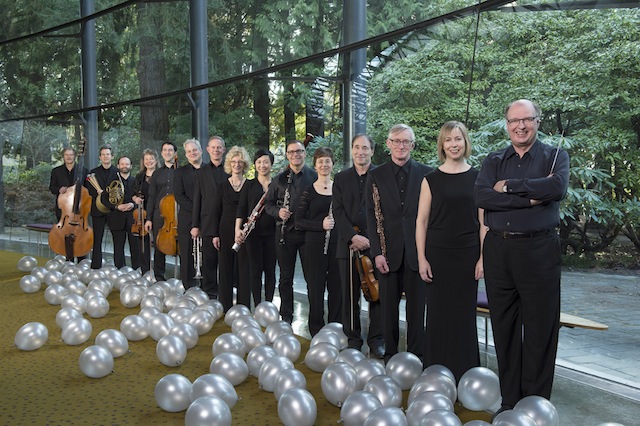 The season launches with a colourful and engaging concert, with an exciting collection of works that evoke imaginary worlds and remembered worlds. Experience the range of works that include a Viennese Kaiser Waltz (Strauss/Schoenberg), folk music of Korean street markets (Unsuk Chin), Vancouver’s early Chinatown (arranged Mark Armanini), the melancholy world of Canadian composer Claude Vivier, and the premiere of Le jour ma nuit by Tajik/Canadian composer Farangis Nurulla-Khoja.

A chamber arrangement of Saint-Saëns’ playful Carnival of the Animals is the centre piece of “Carnival” with a program which includes Paul Hindemith’s brilliant Kammermusik Nr. 3 for cello and ten instruments (soloist Ari Barnes), a premiere from Vancouver’s Jocelyn Morlock, and Debussy’s iconic Prelude for the Afternoon of a Faun.

Connecting music across the centuries with contemporary works that reference and reinterpret music of the past including Britten’s Lachrymae (Marcus Takizawa, viola), a new work from genre-transcending jazz artist Tony Wilson, Bradshaw Pack’s Piano Inclinato di Galileo, an arrangement of the 14th composer Ockeghem by Birtwistle, and Peter Maxwell Davies’ Seven in Nomine.

For the second year, Turning Point Ensemble has offered up a season subscription to one lucky Miss604 reader to enjoy contemporary music and a fabulous night out in Vancouver throughout the year. The prize include a pair of tickets to each of their 2014/2015 shows. Here’s how you can enter to win:

RT to enter to win season passes to @TPE_Vancouver from @Miss604 http://ow.ly/AZRXG

I will draw one winner at random from all entries at 12:00pm on September 13th. Follow Turning Point Ensemble on Facebook and Twitter for more information about performances.

Update The winner is Bob Strain!

Share2
Tweet
Share
Pin1
Email
Reddit
WhatsApp
3 Shares
Current Contests on Miss604
*All contests are open to residents of Canada only, unless otherwise stated. Contest timelines are published on each individual post along with entry methods. Some contests may only be open to those 19 years of age and older. Winners are announced on the contest blog posts. Contest policy »

Also on Miss604.com
« September Events in Metro Vancouver
BC Sports Hall of Fame: Banquet of Champions »