When Nardwuar, the most unique and talented music researcher and interviewer of our time, states that his band will be opening up for his favourite band of all time, you should stop what you’re doing and get tickets for that show immediately. On Thursday, October 2, 2014 The Evaporators (with Nardwuar) and The Flintettes will open for The Sonics at Vancouver’s Rickshaw Theatre.

The Sonics took rock and roll to the edge in 1963 and laid the groundwork for the garage punk and grunge genres we know today.

“The Sonics became regional stars throughout the Pacific Northwest, where their over-the-top performances made them a consistently in-demand live act. But their assaultive approach proved a bit too extreme for national mainstream exposure at the time. The original Sonics splintered in 1967, but the band’s influence and mystique continued to grow steadily in the ensuing decades, as their vintage work was rediscovered by succeeding generations of fans and musicians. Meanwhile, such Sonics standards as “Psycho,” “The Witch,” “Strychnine” and “Have Love, Will Travel” continued to turn up in film soundtracks, TV commercials and the set lists of the countless Sonics-loving bands who emulated—but never duplicated—the band’s sound.” [The Sonics: Bio] 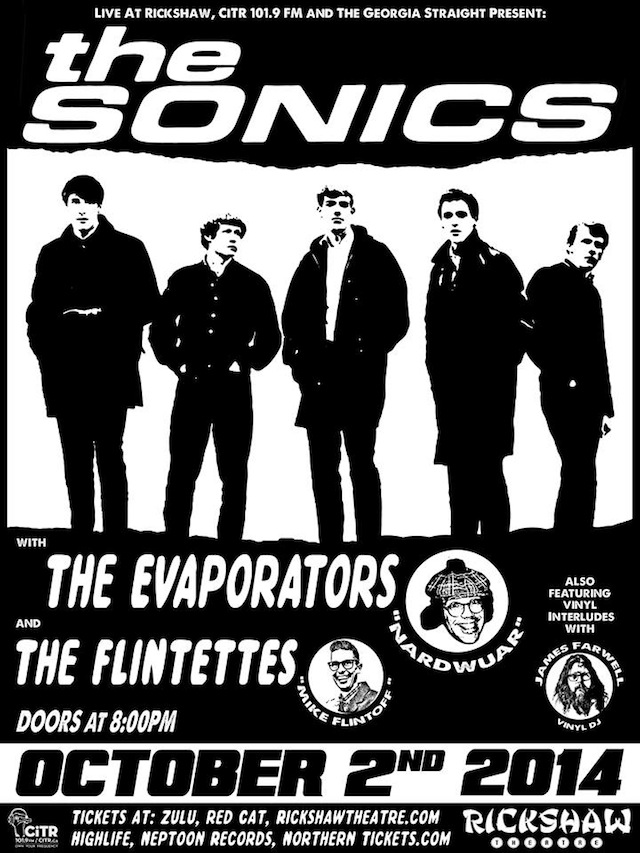 Tickets are now on sale for this show and can be purchased online or at Highlife, Neptoon Records, Northern Tickets, Red Cat, or Zulu Records for $26.50 (plus fees). Follow The Sonics on Twitter and Facebook for more information about the band’s upcoming shows.