It’s time to dust off your lederhosen as Steam Whistle Brewing brings their own Oktoberfest celebrations to the Imperial in Vancouver on September 20th. Enjoy music from The Rheinlander Oom-pah Band, entertainment by the AVC Edelweiss Dancers from the Austria Vancouver Club in Richmond, food by Bestie, and plenty of beer.

What Steam Whistle Brewing’s Oktoberfest in Vancouver
Where The Imperial (319 Main St, Vancouver)
When Saturday, September 20, 2014 at 8:00pm
Tickets Tickets are $15 in advance online or $20 at the door. Each ticket comes with a souvenir 1/2 litre ceramic stein to cheer this renowned beer festival. Prizes will be awarded for best costumes. 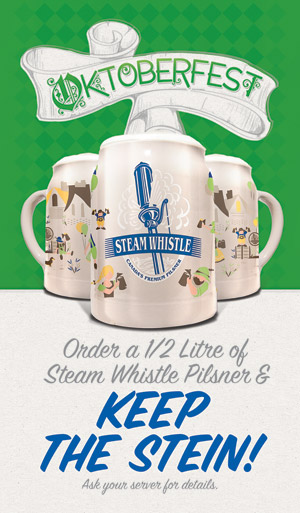 “Vancouver is recognized for its festivals, so we knew after our staff trip to Munich for the world famous Oktoberfest, that if we were going to share the true festival experience with our West Coast friends – we had to do it right,” explains James Foran of Steam Whistle Brewing.

“This is our 2nd year celebrating Oktoberfest in Vancouver and we’re focused on bringing to life the camaraderie, food, folk culture, fun, traditional costumes and beer that Germany is renowned for. We’re inviting craft beer lovers to join in Steam Whistle’s take on this beer celebration.”

Bars across BC will also serve Steam Whistle Pilsner in the limited edition 1/2 litre Oktoberfest ceramic stein through October, while quantities last. Some will even offer a stein re-fill station, ask servers for details.

Steam Whistle is an independent brewery housed in Toronto’s historic John St. Roundhouse, which is actually a dead ringer for the Yaletown Roundhouse in Vancouver. A 2012 Gold Medal winner at the Canadian Brewing Awards, their refreshing Pilsner is crafted with traditional European brewing methods and only four, natural (GMO-free) ingredients under the watchful eye of their Czech Brewmaster.

If you would like to attend Steam Whistle’s Oktoberfest in Vancouver, I have a pair of tickets to give away along with two ceramic steins. Here’s how you can enter to win:

RT to enter to win tickets to @SteamWhistle’s #Oktoberfest from @Miss604 http://ow.ly/B6Vhu

Follow Steam Whistle on Facebook and Twitter for more information. I will draw one winner at random from all entries at 12:00pm on Thursday, September 11, 2014. Must be 19+. Please enjoy responsibly.

Update The winner is Terri!

Share8
Tweet
Share
Pin1
Email
Reddit
WhatsApp
9 Shares
Current Contests on Miss604
*All contests are open to residents of Canada only, unless otherwise stated. Contest timelines are published on each individual post along with entry methods. Some contests may only be open to those 19 years of age and older. Winners are announced on the contest blog posts. Contest policy »